The Gala-Salvador Dalí Foundation presents at the Dalí Theatre-Museum of  Figueres the permanent exhibition DALÍ·JOIES, for which the architect Òscar Tusquets completely remodeled an annex building of  the museum. The two stories that house the collection of jewels have an independent entrance  from the entrance of  the Museum-Theatre, which means that they can be visited separately. The exhibition includes the thirty-nine gold jewels and precious stones of the Owen Cheatham collection, two jewels made later on and the twenty-seven drawings and paintings on paper that Salvador Dalí made forthe jewels designs. Dali Jewels, which represents an extensive collection of works made by the artist between 1941 and 1970, illustrates perfectly the various phases of his artistic evolution.

In 1999, with the advice and supervision of the Associació Espanyola de Gemmologia (Spanish Jewelry Association), the Dalí Foundation purchased the jewelry collection from a Japanese entity for 900 million pesetas. The experts from the Association catalogued each  piece in collaboration with the technicians from the Foundation Conservation Department and Centre for Dalinian Studies, and they  designed  the permanent exhibition.

The history of these jewels began in 1941. The first 22 were acquired by the American millionaire Cummins Catherwood. Salvador Dalí used to design the pieces on paper, with all sorts of details and very precise shapes, materials and colours, while the actual making of the jewels was carried out in New York, under the attentive supervision of the artist, in the studio of Carlos Alemany, a gold/silversmith of Argentinian origin. In 1958 the jewels were acquired by the Owen Cheatham Foundation, a prestigious American foundation created in 1934, which would borrow the jewel collection so that various charitable, educational and cultural entities could collect  funds by exhibiting it; the collection was finally deposited at the Virginia Museum of Fine Arts in Richmond. The collection of jewels was then exhibited temporarily at the Dalí Theatre-Museum of  Figueres during the months of August and September 1973, a year before the inauguration of the Museum. In 1981 it was acquired by a Saudi multimillionaire, and later by three Japanese entities, the last one being the one from whichthe Dalí Foundation bought it.

All the pieces of the collection are single works, and the combination of materials, dimensions and forms conceived by Salvador Dalí make it a unique set in which the artist managed to capture with exceptional mastery his singular iconography. Gold, platinum, precious stones (diamonds, rubies, emeralds, sapphires, aquamarines, topazes, etc.), pearls, corals and other noble materials are combined to give shape to hearts, lips, eyes, plant and animal forms, religious and mythological symbols and anthropomorphic shapes.

Following the model of his admired masters of the Italian Renaissance (Leonardo da Vinci, Michelangelo, Rafael, Cellini, etc.), Salvador Dalí uses all the languages modern culture to develop his artistic discourse: painting, drawing, engraving, sculpture, architecture, photography, theatre, cinema, literature as well as  gold and silversmith creations. With those jewels , which he did alongside his best-known works  as a painter, Salvador Dalí once again sunk deeper into his global conception of art, understanding it as a language without limits that can be expressed through any medium and expressive technique.

As well as designing the jewels, Salvador Dalí also selected the materials to be used, focusing not only in the colors or the value of the material, but also on the symbolic meaning and connotations attributed to the precious stones and noble metals. Some of the jewels that form part of  this collection such as L'ull del temps (1949, The Eye of Time), El cor reial(1953, The Royal Heart) and L'elefant de l'espai (1961, The Elephant of Space), have become iconic works and are considered to be as exceptional as some of his paintings.

Salvador Dalí referring to the collection

"My collection of jewels, brought together by the Owen Cheatham Foundation, will inevitably have historical importance.

History will show that objects of pure beauty, without any utility but marvelously executed , were valued in a time in which the sole emphasis seemed to be on the utilitarian and the material nature of things. Freed from materialism and with a philanthropic purpose, Dalí's jewels stood as a new American Ambassador - Russia, Europe and the rest of the world; a symbol of the cosmogonic unity of our century.

The jewel-encrusted pieces - ornaments, medals, crosses, objects of art - that are to be found in this book were not conceived in order to remain inert in armoured chambers. They were created in order to please the eye, raise the spirits, awaken the imagination and express convictions. Without a public, without the presence of spectators, these jewels would not fulfil the function for which they were created. Thus the spectators become their final creator. The eye of the spectator , his hearts, his mind - that merge and capture with greater or lesser understanding the intention of the creator- lend them life."

Salvador Dalí, about design and inspiration

"In jewels, and in all my artistic activity, I create what I love most. In some of them one can discern an architectural meaning, as it also happens in some of my paintings. Once again, the logarithmic law is  highlighted, as well as the interrelation between spirit and matter, between space and time."

Salvador Dalí, about the relationship between time and space

"I have been aware of the relation  between time and space since   childhood. However  my invention of the "soft clock" - first in oil painting and then later, in 1950, in gold and precious stones - caused a division of opinion: approval and understanding, skepticism and incredulity.

Today, in American schools, my "soft clock" is shown as a prophetic expression of the fluidity of time - the indivisibility of time and space. The speed of travel in the present times (space travel) confirms that belief. Time is not rigid, it is fluid."

Salvador Dalí, about the attribution of human characteristics to inanimate beings

"Anthropomorphic themes appear and reappear in my jewels. I see the human form in trees, leaves, animals; I see animal and vegetal characteristics  in  humans. My art - in painting, diamonds, rubies, pearls, emeralds, gold, chrysolite - demonstrate how metamorphosis comes about; human beings create and change. When they sleep, they change totally - into flowers, plants, trees. The new metamorphosis takes place in Heaven. The body becomes once again whole and reaches  perfection".

Salvador Dalí, about the frivolous nature of certain jewels he himself designed

"Illusory! Dalinian jewels are totally serious. I'm glad that people smile at telephone earrings. A smile is something pleasant. But those earrings, like all my jewels, are serious. They represent the ear,symbol of harmony and unity. They connote the speed of modern means of communication; the hope and the danger of an instantaneous change of thought." 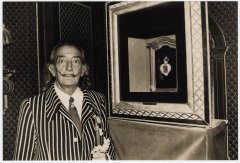 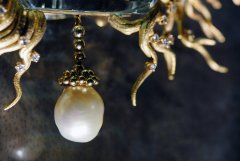 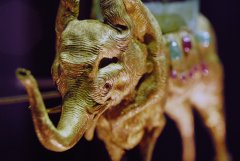 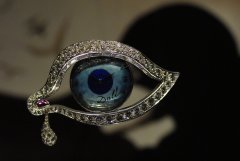 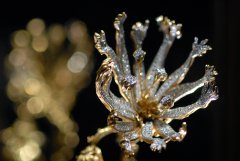