The Portlligat Studio and the Others

Salvador Dalí, admirer and connoisseur of the tradition of western painting and the great masters, and author of the treatise 50 Secrets of Magic Craftsmanship, attached great importance to the space of creation and imagination that is the artist's studio. The studio is also a sacred space, which ends up being permeated by the presence of the artist and even becoming his self-portrait - a self-portrait in which its creator may or may not be present - and an intimately personal microcosm that bears witness to the creative moment. The studio thus gives us information about the person and his working process. It is also a chamber of the imagination, a place of reflection and analysis, where the process of creating is closely linked to the processes of thinking, researching, analysing, reading and looking. The studio, emblematic in ways that go beyond the purely practical or technical realization of the works, also becomes an embodiment of the dialectic, ever present in Salvador Dalí, between the private and the public, between what is hidden and what is shown, between the wise artisan and the eccentric personage who sets out to provoke and get attention.

The photographs in the present volume devoted to Dalí's various studios allow us to immerse ourselves in the artist's work, and a number of them help us fix in our imaginary the image of Dalí the painter, the artist as his own creation. We, as spectators, can here immerse ourselves in the fieldwork of the artist and capture its more intimate or more social context. The pictures, like pure tautology, speak to us about the world of art from the world of art. We may recall here the presence of Velázquez's Las Meninas in the studio in the celebrated painting by the Baroque master. The artist appears surrounded by his tools, his models, and his deepest thoughts. Similarly, we see in some of these photographs how the image of Dalí the painter took possession of Salvador Dalí's persona, a media image that underpinned his worldwide success, and how the studio became the setting.

Dalí's itinerant life meant working in different studios. We associate Dalí with Figueres, Cadaqués and Portlligat. In the next instant, Paris and New York also come to mind, but this book also refers to other places that are part of this series of Dalí's studios though often less readily present in our minds. In Paris, we talk about the various apartments he lived in, but we should not overlook his stays at the Hotel Le Meurice, which became a place to create in, a place of social and public life and a place of both introversion and extroversion. We also consider here his time at La Pausa, Coco Chanel's house in Roquebrune-Cap-Martin, a transition before his lengthy residence in the United States. In New York, the Hotel St. Regis  has an eminent position, but we also allude to the Dream of Venus pavilion he created in 1939 for the World's Fair there, an important venture in that is can be seen as a conceptual forerunner of the Dalí Theatre-Museum. Then there is Hampton Manor in Virginia, the home of Caresse Crosby, where he wrote his autobiography The Secret Life of Salvador Dalí; the Ziegfeld Theatre in New York; the Disney Studios in Burbank; the Del Monte Lodge in Pebble Beach, Monterey, California, probably the least-known of the studios discussed here, and the studio of the photographer Philippe Halsman in New York.

In addition, we must add to this list the ephemeral studios where he occasionally carried out some one-off action that the graphic and written documentation of the time have helped to detail, from the Surrealist dinner at the Del Monte Hotel in 1941 or the performance in 1948 in the gardens of Bomarzo, near Rome, to his performances at Park Güell in Barcelona, by the Gaudí he championed and admired, in 1956 and 1966, where he respectively enacted a performance by painting the silhouette of the Sagrada Família on a giant canvas - with the collaboration of the Harkness Ballet - and painted the interior of a large transparent plastic dome, or the happening in Granollers in 1974, which became part of his film Impressions of Upper Mongolia.

Let us now confine ourselves to the studios that are closest and most significant: the studios in the so-called Dalí Triangle of Figueres, Cadaqués and Portlligat, and Púbol. Dalí's first studio was in his native Figueres, on the roof terrace of the family home, in one of the laundry rooms, and specifically on the sink, where the budding artist worked on paper and canvas, and where he often sat with his feet in the water to offset the heat of the summer. This was the first place where he felt he had a space to paint. Near Figueres is the estate of the Pichot family, the Molí de la Torre, where, following the advice of the painter Ramon Pichot, he made it his practice to paint while contemplating the sunset.

Cadaqués became his second geography, the place where he found the balance and the inspiration for his work. He had a studio in the house of his notary father, and a small rented studio that had previously been occupied by Ramon Pichot, whose sensitive atmosphere it still retained.

The appearance of Gala in 1929 entailed moving to Portlligat, Dalí's only stable home and his studio par excellence, a workspace comprising not only the different rooms he worked in at different times but also the exterior, which provided various settings for creative activity, above all performances and happenings, of which he was a pioneer. Dalí's place at Portlligat is austere, surrounded by the sea and nature in the raw, oriented to the north to get the best light, as Leonardo da Vinci advised. Here he worked to a regular routine with a strict timetable, as he also did during his stays in hotels, where he combined the work regime with an active social life in which the public Dalí was much more in evidence, and all too often even ousted the creative Dalí, the tireless worker, obsessive and meticulous.

At Portlligat, his microcosm, where he worked until the sun light had gone, Dalí saw to it that the whole house and all that went on in it revolved around the ​​spiritual and practical idea of the studio. It is interesting to note, too, that it was at Portlligat, Cadaqués and the Cap de Creus that he found his landscape both real and mental, imagined, which he transferred to the canvas or paper: a landscape that was all around him, seen through the window of the studio, which became the visual frame for some of the works created in this space. He sought a similar natural setting on his trips abroad, for example at Del Monte Lodge, Monterey. As the artist wrote: '...the magic of painting is an essentially "natural" magic, and that just as your best colors are those formed from natural earths and not by artificial chemical mixtures, so it is in things that most commonly surround your Mediterranean daily life that you will find the secrets of miraculous virtues of your media.'[1] Dalí liked the strange connection between art or artistic expression and the surrounding reality, and cited as an example the Dutch-American Abstract Expressionist Willem de Kooning, who needed the presence of the nude model in the studio to paint his figures, which are pure expression.

Another of the spaces that witness to Dalí's creative activity is the House-Museum Gala Dalí Castle at Púbol. Gala began to spend periods of time there in 1969, when Dalí presented the property to her, and he took up permanent residence there after her death in 1982. With the move to Púbol Dalí's studio, in marked contrast to Portlligat, was reduced to a space at the end of the dining room, next to an arched window. This is where he painted his last work, the oil painting Untitled. Swallow's Tail and Cello, in 1983, dedicated to the mathematician René Thom.

In noting all of these sites of creation we must not fail to mention the Dalí Theatre-Museum in Figueres, where the artist regularly worked, from the early seventies until his death in 1989, to convert the former municipal theatre into a museum. This can be considered a total work of art, an embodiment of Dalí's real and imagined universe and the place where he wanted to complete his creative circle by giving the status of studio on one of the areas open to visitors, next to the Palace of the Wind Room, where he exhibited, among other things, an easel that had belonged to the painter Meissonier and two portraits of Gala, model and inspiring muse.

By way of all of these studios, whether transient or more permanent, we can establish an itinerary through the life and art of Salvador Dalí. The photographs - some of them works of art in their own right; others of great documentary value - and the texts that accompany them, written by members of the team at the Fundació Gala-Salvador Dalí's Centre for Dalinian Studies, enable us to appreciate more fully the complexity of the artist, his construction, and the creative process, at once enigmatic and scientific, which may be as absorbing as the finished work, always loaded with hidden meanings that are always open to new interpretations, in which the spectator becomes a participant in the performance.

Director of the Centre for Dalinian Studies

*Most of the photographs published in this volume are from the fonds of the Centre for Dalinian Studies, and for this reason we have given extensive information about the studios of which there are images. It should also be noted that we know of other places, such as Josep Soler i Grau's apartment on carrer Muralla in Figueres, whose walls Dalí decorated with frescoes, where the artist would meet a group of friends that together produced the humorous magazine El Sanyó Pancraci; there were also the Pichot family's estate outside Figueres, El Molí de la Torre, and the studio of the artist and photographer Charles Fontserè in New York. 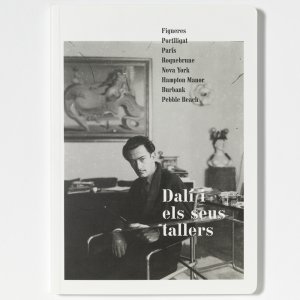