Dalí and the ant: face to face with the superior being

To refer to Salvador Dalí and animals is to identify one of the prevailing iconographic motifs of his works, as already observed in one of his early paintings from 1915, when he was only eleven years old. The artist's compositions doesn't only feature cats, dogs, birds and fish, but also increasingly more exotic animals such as elephants and rhinoceroses as well as, of course, insects: locusts, flies and ants. These all appear repeatedly in his work, each one having its own symbolism.

The ant, one of the animals most admired by Dalí, was represented in his artistic repertoire from the late nineteen-twenties until nearly the end of his career as a painter. It is therefore the animal highlighted here, as it was always given special emphasis and was of particular fascination for the painter.

Salvador Dalí joined the surrealist group in 1929. Although surrealism was a movement composed mainly of writers, it also eventually brought together painters and sculptors. From this period on, ants start to commonly appear in a number of Dalí's works such as The Lugubrious Game, The Great Masturbator, Accommodations of Desire, Gala, The Persistence of Memory and Surrealist Composition with Invisible Figures. [i]

The symbolism surrounding the painter's work isn't simple. In the oil painting The Great Masturbator, Dalí uses ants to show his desires and, at the same time, the horrors that haunt him: the ant represents the putrefaction he fears so much. In his autobiography The Secret Life of Salvador Dalí, published in 1942, the painter offers some clues as to the blend of attraction and repulsion that these insects inspired in him:

[...] The next morning a frightful spectacle awaited me. When I reached the back of the wash-house, I found the glass over-turned, the ladybugs gone and the bat, though still half-alive, bristling with frenzied ants, its tortured little face exposing tiny teeth like an old woman's. [...]

[...] With a lightening movement I picked up the bat, crawling with ants, and lifted it to my mouth, moved by an insurmountable feeling of pity [...].[ii]

That same year, 1929, ants appear in another important work by Dalí. This was Un Chien andalou, one of two films that the artist made with the film director and great friend of his from the Students' Residence in Madrid Luis Buñuel. In his autobiography, the filmmaker describes some shocking scenes from this film:

[...] Un Chien andalou .... came from an encounter between two dreams. When I arrived to spend a few days at Dalí's house in Figueras, I told him about a dream I'd had in which a long, tapering cloud sliced the moon in half, like a razor blade slicing through an eye. Dalí immediately told he'd seen a hand crawling with ants in a dream he'd had the previous night. "And what if we started right there and made a film?" he wondered aloud. [...][iii]

In an article published in La Publicitat[iv] on 7 May 1929, Dalí stated:

[...] As for the ants, it is hard to get hold of ants in Paris. I have already spent two hundred francs on taxis looking for ants, which are essential for the avant-garde film that Luis Buñuel and I are currently making in Paris [...].

In Paris they did not manage to find the ants for the film and Buñuel asked Dalí to have some sent from Cadaqués. The insects eventually reached the French capital from the Sierra de Guadarrama mountain range.

Another film that features ants, in this case a short, is Destino, which was co-produced by Walt Disney and Salvador Dalí in 1946. Although the original lasts less than two minutes, Disney's heirs used the designs that he made with Dalí to compose a short in which the ants also have their place, recovering the familiar imaginary of Un Chien andalou but now turning them into cyclists.

The oil painting Soft Self Portrait with Grilled Bacon[v] was painted some time before, in 1941. In this work Dalí's intention was to show that the artist's soul is of no interest. Only the exterior, with its soft, edible skin, is significant. Ants appear on his face, which, as the title suggests, should also be eaten. In an interview the same year with Alfred Frankenstein, [vi] Dalí states:

[...] Soft self portrait with grilled bacon represents my head without a skull to hold it up. [...] The grilled bacon emphasises the consumability of the flesh, which the ants are eating. [...]

Much later, in 1959, he stated that "[...] I have reached the conclusion that the ant is a superior being. To be truly familiar with something, one must eat it, and these ants eat time [...]."[vii]

Throughout his career, Dalí echoed several times the horror that ants caused him and that represented one of the major creative forces of his work.

Joining the surrealists in 1929 helped him to develop his creativity in full and to express his fears and desires -in short, his humanity- in his artistic creation, which yielded works that, whether in the form of paintings, writings or film productions, manage to captivate viewers unceasingly.

Each work allows for a more thorough interpretation and understanding of the freedom with which Dalí conceived the ant. This requires observation, analysis and contemplation of the work from Dalí's free and spectacular perspective; as free as the ants finding their way.

[i] The works by Dalí mentioned in this publication are accompanied by the respective catalogue raisonné number of Salvador Dalí's works, which may be consulted at /cataleg_raonat/. The Lugubrious Game, 1929, private collection, Cat. No. 232; Accommodations of Desire, 1929, The Metropolitan Museum of Art, New York, Cat. No. 239; The Great Masturbator, 1929, Museo Nacional Centro de Arte Reina Sofía, Madrid, Cat. No. 235; Gala, 1931, Fundació Gala-Salvador Dalí, Figueres, Cat. No. 278; The Persistence of Memory, 1931, The Museum of Modern Art, New York, Cat. No. 265; Surrealist Composition with Invisible Figures, 1936, Fundació Gala-Salvador Dalí, Figueres, Cat. No. 420. 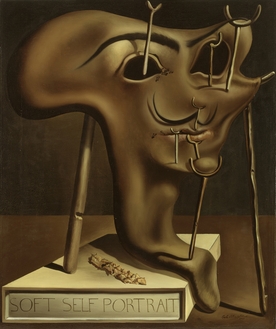