In Salvador Dalí's work we have always been able to discover in one way or another the influences, sympathies and phobias behind it. At times Dalí reveals them clearly, while at others we can just hint it, in both the pictorial works and the writings, that allow us to work them out for ourselves. All this information does not pass unnoticed: just a look at his extremely extensive pictorial work is enough. Furthermore, when we analyse his writing we area ble to identify all these references and many more. His private library is full of works on various authors who influenced him over the course of his career. Amongst them is one to whom Dalí gave particular emphasis: Velázquez.

Salvador Dalí's admiration for the character and work of Velázquez is well known. Velázquez's practice of painting scenes "on location" and the fact that this turned his paintings  into photographic shots must have been something that fascinated him. We find this admiration from very early on and Dalí showed it in the private sphere too. His Portlligat house is decorated with a number of portraits of people with moustache and Velazquez is one of them. Dalí used to say that he collected moustaches, especially if they belonged to famous people. In his studio, too, we find a gridded reproduction of Las Meninas hanging on the wall.

In 1919 Dalí was a sixth-form student at the grammar school in Figueres,currently Ramon Muntaner school. The magazine Studium was the school's magazine at that time and Salvador Dalí contributed to it and was a member of the editorial team. At that time he started a series of portraits of various universal masters of painting under the title "The Great Masters of Painting", and amongst them we find Velázquez. Dalí highlights as the artist's great works Las Meninas (The Maids of Honour) and Las Hilanderas (The Spinners), which he says show a remarkable technique, unsurpassed by anybody else, at times comparing its "colour distribution and placement " with that of the Impressionists .

In the 1940s we can clearly see Velázquez's influence in the works of Salvador Dalí, such as in the magnificent 1938 oil painting, The Image Disappears. We could also cite works such as Galarina and Basket of Bread. In that decade, too, and specifically in 1948, he wrote his treatise on the painting Fifty Magic Secrets of Painting, in which the artist explained the origions of his experience as a painter and gave out his recipe for those able to understand and apply them. Dalí undertakes a comparative analysis of the qualities that an artist must have - technique, inspiration, colour, outline, genius, composition, originality, mysteriousness - and he grades various masters  such as Leonardo, Meissonier, Ingres, Velázquez, Bouguereau, Dalí himself, Picasso, Raphael, Manet, Jan Vermeer and Mondrian. In this personal classification, Velázquez is only surpassed  by the Dutch painter Jan Vermeer, while Mondrian acts as a counterbalance to the admiration he feels for all the other painters.

Later, in the fifties and sixties, we move into the period of nuclear mysticism and the large-format works. It is from then until the end of his life when the influence is very much felt. Examples of this are to be found in paintings such as Velázquez Painting the Infanta Margarita with the Lights and Shadows of His Own Glory (1958), The Maids of Honour (Las Meninas) (1960), and Portrait of Juan de Pareja repairing a mandolin string (1960). In 1960 he took part in a group exhibition at the Sala Gaspar Gallery in Barcelona, entitled O figura. Homenaje informal a Velázquez, with a text thatpraises velazquez, illustrated with a reproduction of Las Meninas. At the end of that same year he organized an exhibition at the Carstairs Gallery in New York under the title The Secret Number of Velázquez Revealed.

The 1960s were also the years the Theatre-Museum idea was taking shape. We find a photo-montage showing the courtyard with various works by Salvador Dalí. Presiding over the doorway leading into the entrance hall from the courtyard anddrawing back a curtain, we find the personality which lets us in, José Nieto by Velázquez (to whom Dalí also dedicated a work). In 1965 he painted The Apotheosis of the Dollar, a work which brings together the most significant images of Dalí's iconography., In the bottom right part of the painting you can notice the figure of Dalí viewed from behind, dressed like Velázquez, painting Gala in which afragment of the work Las Meninas is appears up to three times
In the 1970s the impact of sciencein the works of Dalí can be easily noticeable in the form of stereoscopic pictures, holograms,etc. It is also the decade in which we find a large number of writings in which he quotes Velázquez and others referring to him directly. An example of this is the, "Holos! Holos! Velázquez! Gabor!" published in the American magazine Art News in April 1972. That article coincides with the presentation of a hologram with the same title at an exhibition held at the Knoedler gallery in New York and at the Theatre-Museum in Figueres. In this work Dalí pays tribute both to the figure of Velázquez and the inventor of holography, Denis Gabor. Here, he combines two of his passions: Velázquez and optics, the phenomena related with it and optical instruments (at the age of 10 he had invented an apparatus for seeing everything in a more impressionistic way, as the artist himself tells us in his autobiographical Secret Life). From 1974, we might particularly note the work Bust of Velázquez Turning into Three Figures Conversing, housed at the Theatre-Museum. Dalí, playing with the dual images, paints onto a bronze bust of Velázquez a female figure with headscarf kneeling with her back to us, where the chin and mouth of the bust would be, and two faces with ruffs (two men draped in capes), painted over the eyes, with a reproduction of Las Meninas on the forehead.

In 1976 in an article of his entitled "Eureka", Dalí said: "Since Impressionism, the entire history of modern art has revolved around a single goal: reality. And thist leads us to ask: What's new, Velázquez?". This last phrase is also the title of an article the artist published in the magazine Le Sauvage in Paris on October 1976. And from the years 1976-77 we have different stereoscopic versions of Las Meninas.

On 9 May 1979 Dalí was named foreign associate of the Académie des Beaux-Arts of the Institut de France. He gave a speech called "Gala, Velázquez and the Toison d'Or", in which he related Velázquez with his theories about the Perpignan station. In the 10 May 1979 edition of L'Aurore Michel Déon, of the Académie Française, said as follows of Salvador Dalí: "Few people know that this artist is a skilled technician, who has rediscovered lost recipes, and that his greatest canvases will one day be compared with those of Velázquez or Raphael".

In his last creations, Dalí is trying to discover the secrets of the old masters. His works from this period draw inspiration from those by Michelangelo and Velázquez, and Dalí tries to digest and integrate them into his own paintings. Amongst the works inspired by Velázquez we find: The pearl, after "The Infanta Margarita" (1981), Velázquez and a Figure (1982), The Infanta Margarita María by Velázquez appearing in the Silhouettes of Horsemen in the Courtyard of El Escorial (1982), etc.

The only model that Dalí acknowledges himself to have had is Velázquez, of whom Léon-Paul Fargue has said: "in this universe of affirmed feelings and dreams that is painting, Velázquez symbolises a soul as it should be, violent and meticulous in its forms; it is the art of living serenely". This art is also Dalí's art. 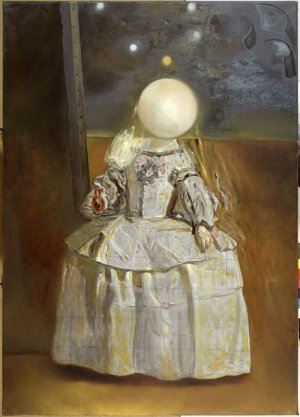 <em>The Pearl. After the Infanta Margarita by Velázquez</em>, 1981