Dalí: “I am surrealism!” Timeless Landscapes

This exhibition The Divine Comedy by Dante Alighieri illustrated by Salvador Dalí is presented exceptionally with a selection of little-known, though thematically related, drawings on the 700th anniversary of the death of the illustrious Florentine poet and philosopher.

Dante was expelled from Florence in 1302. During his nineteen years of exile, he wrote the Commedia in his native language, vernacular Florentine, instead of Latin: his Commedia is considered the first great work of Italian literature.

In 1950, the Polygraphic Institute of the Italian State commissioned Dalí to illustrate The Divine Comedy in anticipation of the commemoration of the poet's birth. Unfortunately, when the illustrations were completed, the commission was canceled due to diverse vicissitudes. Finally, the artist's one hundred original watercolors were reproduced in this limited edition of graphic work which was published by the French editor Joseph Foret between 1959 and 1963, in collaboration with Éditions d'Art Les Heures Claires.

Dalí, familiar with The Divine Comedy from a young age, coveted the commission. During his eight years of exile in the United States, he announced his shift towards the classicism and mysticism visible in these works, in a new pictorial style that incorporates the atomization of the image.

The associated original drawings reflect the energy of Dalí's creative process when he worked on the illustrations for The Divine Comedy between 1950 and 1952 in Portlligat. These were reproduced in the one hundred prints of the graphic edition that masterfully evoke Dante's verses.

If Dante, in his masterpiece, associates his life with ours, so too does Dalí in this timeless dialogue on the human condition and the transcendental power of love.

Dante wrote The Divine Comedy in three canticles that describe his arduous journey through Hell, Purgatory, and Paradise.He travels with Virgil, his guide of Reason, through Hell and Purgatory; and with Beatriz, his ideal woman, through Paradise, in an ascent to reach the Empyrean and the very essence of God.Dalí's highly colourful illustrations are both classic and contemporary. They were published in France in 1960 by Joseph Fôret for the deluxe edition, and by Les Heures Claires for the popular edition. 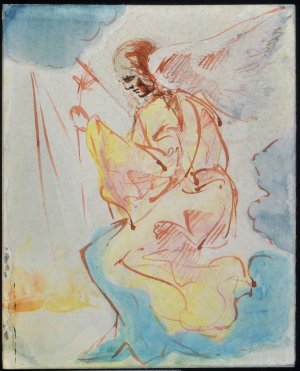