The importance of the car in the work of Salvador Dalí: the "dressed car"

Ever since it was invented, the car has appeared in 20th century art as a symbol of modernity, youth, energy, power, daring, movement and also of innovation, progress and rebellion. In his well-known futurist manifesto, Marinetti expressed it in the following way: "a racing car, which appears to run over shrapnel, is more beautiful than the Victoria of Samothrace".

And Salvador Dalí, together with Lluís Montanyà and Sebastià Gasch, expressed it himself in similar terms on his "Yellow Manifesto" - a leaflet dating from 1928 and containing some of the mainpoint to contextualize this machine inside  the new era: "Machinism has made the world evolve. A postmachinist sensibility has developed and today's artists have created a new art in accordance with that sensibility,in accordance with their era." And they add statements such as the following: "The automobile and aeronautical fair exist" and "we denounce the complete lack of youthfulness of our young people".

Unlike most surrealists, Dalí often depicts the car in his production. It appears in very early works, such as the oil painting entitled Bather (1924), a portrait of his friend Joan Xirau; in a drawing from 1925, or Figueres Girl dating from 1926, in which the word "Ford" appears, a work seen by Picasso when Dalí visited the artist in Paris.

As it could hardly be otherwise, Dalí goes much further and enriches the multiple meanings given to the car, applying to it his paranoic-critical method and his special conception of the world. Thus, he uses the fossilised car which appears in Imperial Monument to the Woman-Girl (1929) to explain the long period of time of themineral presence of the rocks of Cap de Creus (Catalonia). The presence of dynamic machines such as cars or planes creates a dissociation of ideas. It links fossil materials, immemorial in time, to the most recent element  in the history of humankind: the machine that provides mobility. This contrast of ideas and images serves to awaken the imagination of the spectator.

In Dressed Automobiles (1941) he creates a further dissociation of ideas: he dresses the Cadillac up elegantly in clothing worthy of an haute couture boutique. He grants it glamour and distinction, as he also does in some passages of his 1944 novel Hidden Faces,and at the same time he alludes to a dual image, an optical illusion. The presence of enigmatic images brings new and hidden meaning to our vision as spectators. Dalí plays with reality, breakIng it down and transforming it.

The car is a constant element throughout his artistic production. In 1976 he wrote in the first issue of his "Empordà Artistic Weekly" about The Rainy Taxi:

"... the famous Cadillac, of which six exist, that Dalí gave Gala as a present. One of them had belonged to President Roosevelt, another to Clark Gable, etc. This is the fourth reproduction of the famous Rainy Taxi, all destroyed by now.
The first was exhibited, with great success, at the surrealist exhibition in Paris, the second at the World Exhibition in New York, and the third at the surrealist retrospective at the Museum of Modern Art in New York. The fourth is this one, on permanent exhibition at the Dalí TheatreMuseum."

We could say that the Cadillac-Rainy Taxi was the central feature in the stalls section of the former municipal theatre of Figueres, now converted into the Dalí Theatre-Museum, and it has attracted the attention of the more than ten million people who have visited the museum up to date. It is the Cadillac that Gala used to drive in and in which the couple drove from coast to coast during their stay in the United States (Fig. 1).

And again, the car appears in one of his last works Double Victory of Gaudí (1982). Winking at us, the artist depicts his personal version of Victoria of Samothrace surrounded by two cars, once again rendering tribute to this complex machine which gives rise to such a wide range of feelings, perhaps as wide as those aroused by contemplation of the classical beauty. As early as 1929 he had written: "The most perfect and most precise metaphors come to us today coined and rendered objectively by the industry", in what was a real declaration of the principles of the modern credo. 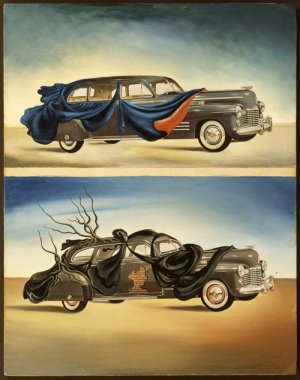