On 12 April 2002, beneath the dome of the Dalí Theatre-Museum of  Figueres,  took place the presentation of the book La veritable història de la Lídia de Cadaqués (The True Story of Lidia de Cadaqués) by Eugenio d'Ors,  illustrated by Salvador Dalí. The book is a translation into Catalan by Teresa Costa-Gramunt and Oriol Pi de Cabanyes of the 1954 first Spanish edition published in Barcelona in   by  José Janés.

This last work by one of the greatest theoreticians of the Noucentisme movement shows us once again the multi-facetted and heterogeneous character of Salvador Dalías a book illustrator. Dalí created the four illustrations that appear in the book: one on the dustjacket, one in the frontispiece and two inside the book. All of them were clearly intended to exalt the figure of Lídia, the Cadaqués fishseller who believed herself to be Teresa, the main character of the work La Ben Plantada, by Eugenio d'Ors.

Dalí, like Lorca and Buñuel, professed great admiration for this unusual personality. In The Secret Life of Salvador Dalí he wrote: "Lídia is possessed of the most magnificent paranoic brain, apart from my own, that I have ever come across". And just as he did in the case of Gala - though naturally on a much lesser scale - he publicly acknowledged this fondness and fascination, as we can appreciate in some of the pictures he made for the book.

The illustration in the frontispiece depicts an olive tree woman "Of fine bearing, and well-rooted in the living rock, in the pure mineralogy [...] so that no gale could uproot her from Cap de Creus", as the painter describes Lídia in a manuscript kept at the Centre for Dalinien Studies  of the Gala-Salvador Dalí Foundation. It is signed Gala Dalí, dated 1954 and bears the following  dedication : "To Lidia, who sheltered us eternally in Portlligat".

One of the illustrations inside the book is a clear allusion to the classification Lídia used to make of the inhabitants of Cadaqués: "the good people" in whom she could trust and whom she called "The Society of the Secret of Xènius" (which included the Dalí family and the Pichots), and the "bad people",  that is to say the other people in the village who were for her "The Society of Goats and Anarchists". Signed and dated like the previous illustration, Dalí wrote on it: "The enemies of Lidia 'goats and anarchists'".

But who in fact was this woman to whom nobody felt indifferent? Lídia Noguer i Sabà was the daughter of the woman known as "Sabana". She was considered to be one of the last witches of Cadaqués, and ran a boarding house for some time. Her house was used by personalities as illustrious as Picasso and Puig i Cadafalch. In 1904 she met Eugenio d'Ors, during a short stay the young intellectual made in Cadaqués. From this meeting was to arise the admiration that  became the great obsession of Lídia. When d'Ors wrote his La Ben Plantada in 1911, Lídia immediately identified with Teresa -she sometimes even claimed that that was in fact her name - and the fascination she felt for the writer became more obsessive, finally degenerating into a progressive delirious madness. She went to the extremes of interpreting the articles he wrote for the daily column ( and entitled  "My glossary") in La Veu de Catalunya. Lídia would read them and reread them continuously, since she saw  them as  the replies to the letters she had sent to the writer.

It was not until seven years after Lídia's death, however, that Eugenio d'Ors showed a real interest in her, for he went to Cadaqués in the company of Cesáreo Rodríguez-Aguilera with the intention of gathering information about that woman who had sent him so many missives to which he had never replied. It was then that he asked Salvador Dalí if he would like to be the author of the pictures that were to illustrate his book La verdadera historia de Lidia de Cadaqués.

Dalí, who at that time was also planning to write a book about Lídia, was enthused by the idea. The relationship between Lídia and Dalí had in fact started very early on. As a young boy the painter would listen to the stories she would tell the children of Cadaqués. And when in 1929, the artist decided to set up home with Gala in Cadaqués, against the wishes of his father, Lídia was the only person who helped him and sold the couple the fisherman's cabin in Portlligat which her two sons used to stow their fishing equipment. This was the place that was to become the only permanent residence of the Dalí couple upon their return from the United States at the end of 1948, and is the abode which now forms part of the "Dalí triangle". 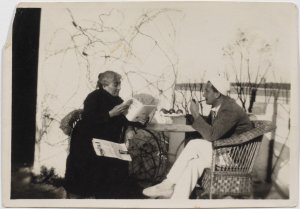 Salvador Dalí and Lídia Noguer in Portlligat, at the beginning of the 1930s