Dalí and Fages: "that intelligent and most cordial of collaborations"

The Museum of the Empordà is holding a very interesting exhibition on Carles Fages de Climent within the framework of events organised by the town of Figueres to celebrate the poet's centenary. The exhibition, which casts light on  this poet from the Empordà, consist of  three distinct display areas described in  a complete catalogue intended to facilitate future research on this writer.

We would like to focus on one of the aspects   of this exhibition: the relationship between Salvador Dalí and Fages de Climent. It commenced at an early stage, since both were born in the same street, Carrer Monturiol, in the town of Figueres. It was a life long friendship  that produced some fruitful results.

Dalí worked with Fages from as early as the 1920s since In 1924, he illustrated Fages' poem entitled Les bruixes de Llers ('The witches of Llers'). In 1950 Fages published the Poema dels tres reis ('Poem of the three kings') illustrated by Joan Commeleran. The copy kept by Dalí in his library is dedicated by the author. It says: "I dedicate the POEMA DELS TRES REIS to Salvador Dalí, my lifelong friend, in remembrance of the shoemaker of Ordis". In 1954 Dalí illustrated and wrote the epilogue for the Balada del sabater d'Ordis ('Ballad of the shoemaker of Ordis'), which Fages de Climent dedicated to him as follows: "To my brilliant and constant friend Salvador Dalí, celebrated illustrator and most honourable author of the epilogue for the Balada del sabater d'Ordis, with a most affectionate embrace - Fages de Climent, 1954". In 1956, an article about Cadaqués written by Fages and published in the magazine Canigó included a text by Dalí entitled "Cadaqués, el poble més bonic del món" ('Cadaqués, the prettiest town in the world') as well as an illustration by the artist. In 1961, a few years before the death of Fages, and on the occasion of a tribute paid by the town of Figueres to the artist, Dalí and Fages  prepared together an auca (a series of pictures with captions in rhyming couplets which tell a story) entitled El triomf i el rodolí de la Gala i en Dalí ('The triumph and the couplet of Gala and Dalí'). Fages wrote the verses and the artist made the drawings to accompany them.

We can see, therefore, that beyond a mere friendship, Salvador Dalí and Fages de Climent were united by a close artistic collaboration. It could be claimed that there was no other Catalan writer and very few writers from around the world with whom Dalí worked so assiduously. It could also be claimed that the exchange of ideas was mutual. The poet, speaking of Dalí in an interview with Josep Maria Bernils published in Canigó in December 1955, said: "We grew up and went to school together. The fact that I was one year older than him meant that he thought highly of me and we were great friends. I had the honour of his helping me with my first book". The interview went on to refer to a common project which was not disclosed. A clear example of this intellectual exchange can be found in the elaboration of El sabater d'Ordis. In Fages' dedication of the Poema dels tres reis to Dalí, there are references to this work which was published three years later. In a letter to the artist dated 12 August 1951, now part of the archives of the Centre for Dalinian Studies, Fages wrote: "Referring to El sabater d'Ordis, I have concluded the poem. [...] I have added a second part, almost as long as the one  you already know, and I believe that it is a success, it may well be better than the first, making that great personage of ours more concrete. I hope that it will be possible for you to make and send me your artistic interpretation of the great director of wind, dated 1923. I will have it published immediately. The format will be that of the Poema dels tres reis with the same margins. For me it would be an indescribable treasure to return to that intelligent and most cordial of collaborations".

We can find another example of this communication and deep knowledge of both personalities in El triomf i el rodolí de la Gala i en Dalí, which is a summary of the myths, obsessions and iconography of Salvador Dalí. In our archives we have an unpublished document (copies of which can be seen in the exhibition), which leads us to believe that perhaps they had decided to continue working on it. It is a typed text with autographed annotations by Fages in  Spanish  and with  images stuck directly on the paper. The text is incomplete and we have no further references to it. The fact that this document was found in the artist's estate would indicate that this was a document on which Dalí had worked too. It is the translation into Spanish of a part of the couplets (numbers 4 to 26), with detailed explanations by the poet as to the significance of the iconography illustrating the verses and also on the life, thoughts and  work of Dalí. There are also allusions to the preparation of the auca and its repercussions in the press. Fages acknowledges three of the couplets as being Dalí's, and this is corroborated by his son Pere Ignasi Fages.

The last collaboration between the poet and the artist was in the context of the work El somni del cap de Creus ('The dream of cape Creus') which was never published. Nonetheless, some fragments were known, such as the Oració al Crist de la tramuntana ('Prayer to the Christ of the north wind'). As a posthumous tribute to Fages de Climent, we recommend a study of the magnificent painting Christ of the Tramuntana, cultural heritage of the Empordà, fruit of the skill of two artists born in Figueres. 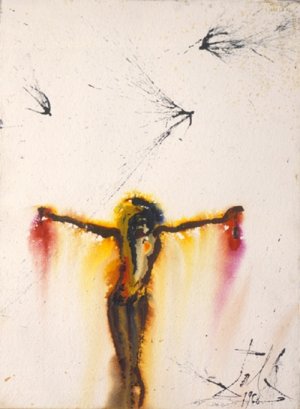 Salvador Dalí Christ of the Tramuntana, 1968