The Dalí Theatre-Museum: the result of an artist’s obsessive zeal for research

The Dalí Theatre-Museum in Figueres is a unique space, a museographical model based on the artist's conception of enhancing the semantic possibilities of his own creation, an outstanding work of art which gives priority to concepts and ideas over chronological historicism, an original outlook... What we find here is an essential part we need to know in order to understand the whole.. When Dalí created his biggest masterpiece, his greatest surrealist object, his self-designated "ready-made" space, he separated himself once again from the fashion of the time and offered a centre full of emotions, statements and provocations that never fail to arouse the interest of the visitor-spectator.

At the Museum, the building itself shapes the general outline of Dalinian creativity, offering visitors a journey through Salvador Dalí's personal and artistic trajectory, from a surrealist approach to an art exhibition or that of Dalí himself. We can see works from each of Dalí's artistic periods, from the early impressionist, cubist, pointillist and fauvist paintings to his surrealist, classicist and mystical-nuclear periods, with the latter works linked to the scientific progress of the age. Also displayed here are paintings from his last 1980-1983 period, during which Dalí got back to  the great classical masters, notably Michelangelo and Velázquez. Here we find the most provocative side of Dalí, the mystical one, the set designer, the science enthusiast and, above all, the Dalí of the final period.

Ignacio Gómez de Liaño linked the Museum to the "Theatre of memory" of Giulio Camillo, hermetist humanist of the Venetian Renaissance, who named his theatre "by many names. Camillo says it is mind-built and constructed, a mind and soul with windows. He claims that everything conceived by the human mind but invisible to the human eye can be expressed by material signs, in such a way that the spectator can instantly perceive it with his own eyes all that otherwise would remain hidden in the depths of the human mind. It is for this physical aspect that it is called a Theatre".

The personage and works of Salvador Dalí are universally known and recognised. However, in order to gain a better understanding, we must pay a visit to the Theatre-Museum where the artist overturned all his wisdom and all his artistic and cultural wealth. The Museum fulfils perfectly the goals of itscreator: the visit leaves nobody with a sense of indifference, enriching everyone that experiences it, as  Dalí suggested with the painting on the ceiling of the Wind Palace, from where gold rains down upon surprised spectators, upon the city of Figueres and upon the whole of Empordà county. The boundless, tireless imagination of the artist allows visitors of thismagnificient surrealist object  a glimpse to new visions, concepts and thoughts.

Works such as The Spectre of Sex-Appeal, The Basket of Bread, Galarina, Leda Atomica, Putrefied Bird, Poetry of America (later entitled The Cosmic Athletes), Soft Self-Portrait with Grilled Bacon and Portrait of Picasso offer an idea of the superb collection on display at the Museum. The paintings are complemented by other drawings and documents, essential for a deeper analysis of Dalí's work. Recent acquisitions such as Girl from Figueres, the oil painting that Dalí showed Picasso on his first visit to Paris, and also Surrealist Composition. Inaugural Goose Flesh, William Tell and Gradiva, Average Pagan Landscape, Apotheosis of the Dollar, Napoleon's Nose Transformed Into a Pregnant Woman Melancholically Walking Her Shadow Amidst Original Ruins and Portrait of Laurence Olivier in the Role of Richard III all enrich the visit by increasing the presence of periods that were previously under-represented in the Theatre-Museum.

The genesis of the Theatre-Museum structure started in 1961 and developed until its opening on 28 September 1974. The Museum was still under construction and redesign when the painter died in 1989, as Dalí was constantly bringing in new ideas and proposing changes until the very end of his life. On 27 September 1974, the day before the official opening, Dalí made the following statement to the Diario de Barcelona: "I shall be working on it (the Theatre-Museum) forever (...) what the public will see this year in the Museum is but an infinitesimal part of what will be coming in the future and what I shall contribute (...) in other words, what you see here and now is a mere beginning".

In today's Dalí Theatre-Museum, there are two distinct museum spaces:

The first space occupies the former Municipal Theatre, a 19th century construction designed by architect Roca i Bros. The original building had burnt down and was later converted into the Theatre-Museum under the design and guidance of Dalí. The result is a unique artistic object, in which each part is inseparable from the whole, an artistic creation that must be conserved exactly as Dalí conceived it.

The second space includes the progressive enlargements that have been added to the main space. The Torre Galatea building was acquired in 1981 and another adjoining building was purchased in 1992 by the Gala-Salvador Dalí Foundation. It is here were the impressive Dalí·Jewels collection from the Owen Cheatham Foundation is displayed, Dalí's renovation of the jewellery-making tradition. The collection is made up of pieces that were designed not so much to be understood but as to create a form of spiritual inspiration on the visitor. Dalí's jewellery symbolises the cosmogonical unity of the century.

The first space is Dalí. The artist even named some of the rooms himself: we can visit the Treasure Room, called thus after its shape like a red velvet-lined treasure-chest containing art treasures; the Fishmongers' Room whose name recalls its former use in the market hall of Figueres; the Masterpiece Room containing part of Salvador Dalí's private collection of works by favourite painters such as Marià Fortuny, Modest Urgell, Gerard Dou, Meissonier, El Greco, Marcel Duchamp and Bouguereau. On the second floor of the Theatre-Museum, we can admire the works of Antoni Pitxot, whose friendship with the artist dates back to old family connections and who collaborated in the construction and design of the Theatre-Museum. On the ground floor, there are paintings by Evarist Vallès.

Entering the Theatre-Museum means walking into a fascinating stage, to join one of Salvador Dalí's games in a theatrical dreamland. Some rooms such as the 3-dimensional, anamorphical Mae West Room installation, reproduced from the Chicago Art Institute original with the collaboration of architect-designer Òscar Tusquets typically eert a certain attraction on all visitors to the museum

The emblematic geodesic dome designed by Emilio Pérez Piñero should not gone unnoticed either. The enormous, transparent rectilinear structure impressively crowning the stage of the former Municipal Theatre, from the ruins of which emerged the present Dalí Theatre-Museum, has become one of the most characteristic features of today's Museum.

In the central courtyard, parterre of the original theatre, there is a vertical installation made out of a Cadillac known as the Rainy taxi. The former parterrerepresents an invitation to a Dionysian festival. The greatest surrealist moment in the world consists of Ernst Fuchs' huge sculpture of Queen Esther dragging a column of tyres with her chains, François Girardon's bust, Michelangelo's Slave and finally a boat belonging to Gala.

If we add to all the above the jewellery designed by the Master, Dalí's studies of backdrops for ballet and theatre shows, his drawings and engravings and his numerous optical games, we getto discover how unique, multi-faceted Dalí was, a Renaissance man, a writer, thinker and philosopher.

All the spaces and works of art inside the Theatre-Museum exert great attraction mysticism. For this reason, visitors continue to queue up enticed baura of a genius, the attraction of misterious. Dalí opens a door into a world of itself, into a world  created by the unconcious.

The Dalí Theatre-Museum represents the projection and materialisation of all the dreams and creative energy of the artist and is the outcome of his obsession for research. As Dalí himself said: "It is of course obvious that other worlds exist but, as I have often said, these other worlds exist within our own, they reside on earth in the very centre of the dome in the Dalí Museum, where there is the whole unsuspected, hallucinating new world of surrealism". 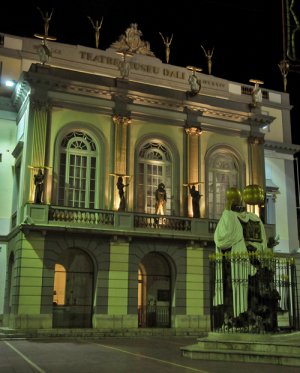