VISIT THE DALÍ MUSEUM BY NIGHT AND LIVE A UNIQUE EXPERIENCE

Portrait of the adolescent artist

If we look at the dictionary definition of "self-portrait" we find: "A portrait of oneself  done by onself". That is precisely what Dalí often did over the course of his life. Here I would like to focus  on the self-portraits made by the  Dalí when he was very young-the ones he painted between the ages of fifteen and seventeen, i.e. from 1919 to 1921.

These portraits are particularly interesting for the intention they reveal: that of projecting a certain image of himself. They are an attempt at personal and artistic self-affirmation. Hence, we might note that the self-portraits from these years are closely connected with the  early-on diaries that Dalí wrote over the course of 1919 and 1920 and which Fèlix Fanés published in 1994 under the title Salvador Dalí. Un diari: 1919-1920. Les meves impressions i records íntims (Salvador Dalí. A Diary: 1919-1920. My Private Impressions and Memories").

Salvador Dalí wrote   in those diaries almost on a daily basis, leaving a record of his day-to-day activities and of his views on politics and art. In those diàries, we discover an enthusiastic, impetuous, sentimental and romantic Dalí who revels in spending  summers in Cadaqués where he can paint  the impressionist way, that Ramon Pichot had acquainted him with. Proof of that is to be found in the letter that Dalí wrote to his uncle Anselm Domènech in 1920, also included in his diary. It  seemed appropriate to reproduce an extract of it here, due to the parallel we can make  with the paintings of those years:

"Dear Uncle,
I've spent a delicious (summer), as they all are, in the ideal and dreamlike village of Cadaqués. Here, by the Latin sea, I have imbibed light and colour. I have spent the burning hot summer days painting frenetically and trying to capture the incomparable beauty of the sea and the sunny beach.

The further I go the more I realise how difficult art is; but also, the further I go the more I like and enjoy it. I still admire the great French impressionists Manet, Degas, Renoir. They are the ones that point out my path most decisively. I have changed technique almost entirely: the colour hues are now much lighter than before and I have completely abandoned the dark blues and reds that before contrasted (inharmoniously) with the lightness and brightness of the other colours.

I'm still not much concerned with outline, and indeed  entirely do without it. Colour and feeling are what I am focusing on.

[...] I find portraiture increasingly interesting, although technically I consider it like landscape or still-life painting [...]".

I will not call into question Dalí's own words, but apart from  a pictorial exercise, might we not see the self-portrait of these years  as a manifestation of the awareness of his own singularity?

In his diaries,  when Dalí found out in April 1920,  that his father had decided he should pursue his studies at the Special Painting, Sculpture and Etching School of the Real Academia de Bellas Artes de San Fernando in Madrid, he declared: "I will be a genius, and the world will admire me. I may be despised and misunderstood, but I'll be a genius, a great genius, because I am sure of it".

Dalí's desire to be a painter was clear from early on, as was the fact that pictorial activity would be what would allow him to become a genius. Already around 1919 (1), he was making self-portraits of himself painting in his Cadaqués studio, and - as Dalí's own words above recount - we can grasp his interest in impressionism, colour, mastery of pink and reddish hues, and particularly the study of light. When we look closely at Self-portrait in the Studio, which belongs to the Salvador Dalí Museum of St. Petersburg (Florida) collection, it seems like that Dalí might have been acquainted with the early Fauvist works that Matisse painted in Collioure in the summer of 1905 and that took part  in the magnificent exhibition at the Museum of Modern Art in Ceret in 2005 entitled Matisse-Derain. Collioure 1905, un été fauve. This Fauvist influence is suggested by the theme of brightly lit interiors with a balcony opening out over the Mediterranean sea, and particularly the chromatic similarity to Matisse's Open Window.

Dalí made anotherportraits of himself in the act of painting at the  Pichot Studio of La Riba in Cadaqués. It is a painting that dates from around 1920,but whose whereabouts are unfortunately now unknown.

Other diary extracts corroborate the parallelisms between Dalí's writings and what he sets down in the self-portraits. They reveal how Dalí often adopted a distant and superior stance towards his peers, while his behaviour was at the same time designed to make an impact on those very peers and on people in general. Then again, and for the same purpose, we can read how Dalí  modelled his physical appearance by wearing long hair and sideburns  and dressing in an extravagant manner.

The Self-portrait from c. 1919 belonging to the Gala-Salvador Dalí Foundation, the one from c. 1920 from the E. Isern Dalmau collection and the one from c. 1921 from the Salvador Dalí Museum in St. Petersburg (Florida) share an unusual feature that largely backs up what we have said so far. The artist respresent  himself  in profile, looking at the viewer , though with one of his eyes concealed. This portrait -  though a magnificent study of light and chiaroscuro - shows a certain arrogance, not to mention the iconological connotations of the eye in the course of the history of art.

In the Self-portrait from c. 1920 from the former Serraclara collection, and the Selfportrait with Raphaelesque Neck from c. 1921, Dalí depicts himself with the Cadaqués landscape as a backdrop, thereby combining his favourite themes of those years. Landscapes are always a good excuse to experiment with light and colour, which became  brighter and brighter. Dalí painted from nature and he felt a special interest in the light of dusk, of which he managed  to capture all of the chromatic hues. His brushstrokes are broad and free-flowing. As he explained in 1922, itwas to avoid the sunset looking like a postcard view.

While in the Self-portrait from c. 1920 he presents himself with his head turned towards the spectator in a more romantic stance, in the one showing a strong empathy with nature ( Self-portrait with Raphaelesque Neck) , Dalí stares at the spectator almost severely. As its title implies, this oil painting is a homage to one of his favourite painters, Raphael, whose self-portrait was only too well-known to Dalí, since it was reproduced in the frontispiece of the Gowans collection volume (Dalí had the full set) devoted to this artist.

We might well say, then, that in general the portraits from those years convey a narcissistic image of Dalí who dominates the pictorial space and exalts his own individuality, hinting at the exhibitionism that was to characterise him throughout his life. Artist and work became inextricable from one other, for Dalí is at once the author and main player of both his paintings and of his writings. According to Robert Lubar: "To speak of the self-portrait in Dalí's oeuvre is to a large extent tautological, for Salvador Dalí - the man, the artist and the person - is at the same time the subject and the main object of his own artistic trajectory".

Note:
1. It should be pointed out that the approximate nature of the dates of execution of the works is due to their not having been signed or dated, with the exception of the Selfportrait from the former Serraclara collection, which is signed. The dates given in this article are taken from the Gala-Salvador Dalí Foundation's Catalogue Raisonné of paintings [1910-1930]. 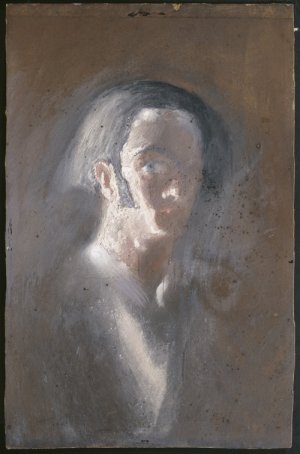