News. Presentation of the Owen Cheatham Collection of 39 jewels and 27 drawings by Salvador Dalí. Dalí Theater-Museu.

The latest acquisition of the Gala-Salvador Dalí Foundation includes the thirty-seven gold jewels set with gems of the Owen Cheatham Collection, two jewels made later, twenty-seven drawings and paintings on paper that Salvador Dalí made when designing the jewels, and an exceptional object: a scenic box with glass panels painted by Dalí during his project for the film Babaouo. The whole makes up an extensive collection of work done by the artist between the years 1932 and 1970.

The collection has been acquired from a Japanese company for some 900 million pesetas, with the negotiations coming to an end on 28 May during a trip to Tokyo by a delegation from the Gala-Salvador Dalí Foundation, headed by its President Mr. Ramon Boixadós, advised by two experts from the Spanish Gemology Association. Over the course of recent months, these experts have been cataloguing each of the pieces in collaboration with technicians from the FoundationÍs Conservation Department and the Dalâ Study Centre, and work is now being done ahead of the museum project for future permanent exhibition of the works in the Dalâ Theatre-Museum.

All the pieces in the collection are unique works, and the combination of materials, dimensions and shapes used by Salvador Dalí make it an unrepeatable whole in which the artist captured uniquely the wealth of his iconography. Gold, platinum, precious stones including diamonds, rubies, emeralds, sapphires, aquamarines, topazes, etc., which along with pearls, corals and other noble materials combine to lend form to hearts, lips, eyes, vegetable and animal forms, and religious, mythological and anthropomorphic forms. In addition to designing the form of the jewels, Salvador Dalí selected each one of the materials in which they had to be made, not only for their colours or their value but also for the meanings and connotations attributed to each of the precious stones and noble metals. Some of the jewels that form part of this collection - such as Ruby Lips (1949), The Eye of Time (1949), The Royal Heart (1953) and The Space Elephant (1961), amongst others - have become highly famous works and are considered to be as exceptional as some of his paintings.

Referring to these jewels, Salvador Dalí explained: "Without an audience, without the presence of spectators, these jewels would not achieve the function for which they were created. The spectator is therefore the final artist. His eyesight, body and mind - with greater or lesser ability to understand the artistÍs intention - lend life to the jewels."

The history of these jewels began in 1949. The first 22 were acquired by the North American millionaire Cummins Catherwood. Salvador Dalí designed the pieces on paper, with every wealth of detail and considerable precision of shapes materials and colours, while the actual jewellery was made in New York by the Argentinian-born goldsmith Carlos Alemany. In 1958 they were acquired by The Owen Cheatham Foundation, a prestigious North-American foundation created in 1934 that lent the collection of jewels out so that various charitable, educational and cultural institutions could organise exhibitions around them for fund-gathering. The collection was finally deposited at the Richmond Museum of Fine Arts (Virginia). This collection of jewels had already been exhibited at the Dalí Theatre-Museum in Figueres in the months of August and September 1973, a year before the museum was actually inaugurated. In 1981 the collection was acquired by a Saudi multi-millionaire, and later by three Japanese companies, the last of which formalised its sale to the Gala-Salvador Dalí Foundation. 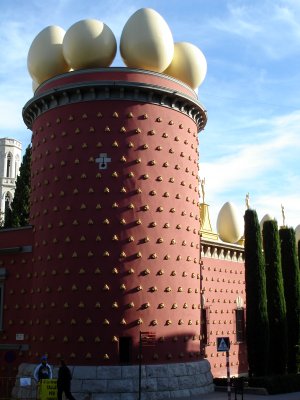