News. Girl at a window exhibited to celebrate 40 years of the Theatre-Museum

Today at 11 a.m. in the Drawings Room of the Dalí Theatre-Museum in Figueres the Fundació Gala-Salvador Dalí presented the temporary loan of one of Salvador Dalí's most emblematic works: Girl at a window, from 1925. The painting has been loaned by the Reina Sofía Museum in Madrid for three months as part of an exchange between the two institutions. The Dalí Foundation has, in turn, loaned the Reina Sofía Museum another portrait of Anna Maria, entitled Portrait of my sister, painted in the same year.

The event was led by Antoni Pitxot, director of the Dalí Theatre-Museum, and Montse Aguer, director of the Centre for Dalinian Studies. The Dalí Foundation's ongoing policy of collaborating with museums from all over the world and great collectors of Dalí's work has enabled it to make temporary loans and exchanges of some very important pieces in recent years.

To mark the occasion of the fortieth anniversary of the inauguration of the Dalí Theatre-Museum, the Dalí Foundation wanted to show its visitors one of the most representative oil paintings from the artist's first period. The painting is entitled Figure at a window, and is also known as Girl at a window. This piece depicts the artist's sister, who Dalí painted regularly during the 1920s. In fact, Anna Maria was the artist's model until 1929, when Dalí met Gala and his relationship with his sister entered a different phase. In this picture, the girl is seen from behind, looking out of a wide-open window at the sea at Cadaqués, a landscape that would remain close to the Dalí family and Anna Maria throughout their lives.

Context of execution of Girl at a window

It is very likely that this piece was painted during one of the Dalí family's holidays in Cadaqués. Through their friendship with the Pitxot family, remembered as the first tourists to summer in this town on Cap de Creus, from about 1910 onwards the Dalís also began to spend their summers in Cadaqués. The background depicted in this oil painting could be the view from one of the windows of the house the family owned on Es Llaner beach: with the sea in the foreground and, on the horizon, the opposite shore of the bay of Cadaqués, today the location of Avinguda de Víctor Rahola. This specific landscape reappears many times in Dalí's work. It is the same setting we can see, for example, in Rocks of Es Llaner from 1926 (cat. no. 183), an oil painting that allows us to identify the family home in Es Llaner as the starting point for this work.

Another element that indicates that we are looking at Cadaqués, specifically Es Llaner, are the houses reflected in the window, the same white buildings still recognisable as the landscape of Cadaqués today. We must not forget that Dalí painted these surroundings again and again during his formative years as an artist. During the 1910s and 1920s, the painter repeated the theme of landscapes, and Es Llaner and Cadaqués are the central subjects of his canvases: Es Llaner Beach, c 1916 (cat. no. 32), Landscape of Cadaqués. Port Alguer, c 1919 (cat. no. 72), Cadaqués, c 1919 (cat. no. 83), Port d'Alguer and Mount Paní from the Town Hall, c 1920 (cat. no. 44), Es Llaner Beach, 1921 (cat. no. 114) and Port Alguer, c 1923 (cat. no. 140).

It is, then, this Cadaqués that Dalí subtly conjures up beside Anna Maria. As we have already mentioned, the 1920s were Dalí's formative years during which he defined his own style by experimenting with different artistic styles and flirting with several movements from that period before finally identifying himself with surrealism. Perhaps we could define Girl at a window as being influenced by the Noucentista movement, because it captures a simple everyday moment such as looking out at the sea, and also because of the classic treatment Dalí gives Anna Maria's body and, above all, because of the technical skill demonstrated in Dalí's brushwork. We can see how, by 1925, Salvador Dalí was already communicating in his own language and combining perfect brushwork with his mastery of scenic composition.

This painting was first exhibited, together with 17 other paintings and five drawings, at Dalí's first solo exhibition held at Galeries Dalmau from 14 to 28 November 1925. According to news coverage of the exhibition at the time, the event was widely celebrated and hailed as a huge success. Dalí was even honoured at two gala receptions, one given at the Hotel España in Barcelona, on 21 November, and the other at the Hotel Gifré in Figueres, on 5 December.

These and other news items were preserved as notes and newspaper cuttings in an album-diary which the artist's father, the notary Dalí, compiled over the years by collecting everything relating to his son's career as a young artist. A couple of examples taken from this collection are:

La Publicitat (Barcelona, 20/11/1925). In the section 'Carnet de les Arts', C. C. informs us of the following: "The painting Figure at a window, which was the most acclaimed work, is the zenith of the juxtaposition of these two elements. The bluish grey tones that infuse the entire painting, the magnificently diffused light that makes the human figure stand out with such extraordinary nobility from the transparent atmosphere of the background; all of this bestows a vague elegiac resonance on this engaging and penetrating piece."

According to J. Cusí, in an article about the exhibition of Salvador Dalí's paintings published in La Veu de l'Empordà (Figueres, 12/12/1925): "Figure at a window, even though it has the same qualities as the other paintings, is fresher, softer in colour and more luminous. When looking at this picture, one encounters an indefinable feeling of peace and wellbeing. Light plays across the folds in the fabric and the water of the sea in a captivating manner. In all of Dalí's canvases there is something that attracts; his paintings are not simply a technical and well-chosen combination of colours: the artist's emotion is deeply rooted behind all of them."

It is clear from these reviews that Dalí had gained the first important recognition of his work and that both his exhibition at Galeries Dalmau and his painting Girl at a window were widely talked about and praised. Salvador Dalí's talent had become official.

This painting has only been seen once before in Figueres, as part of an anthological exhibition in 1983 held in Barcelona and Madrid, part of which travelled to our museum.

The Dalí Foundation commissioned a special installation in its Drawings Room expressly for this temporary loan. The installation was designed by Pep Canaleta and the graphic design was arranged by Alex Gifreu. The painting will be on display for three months -from today, 25 September, until 31 December- and it will be one of the key attractions of the special night-time opening on 28 and 29 September, organised as part of the events to commemorate 40 years of the Dalí Theatre-Museum. 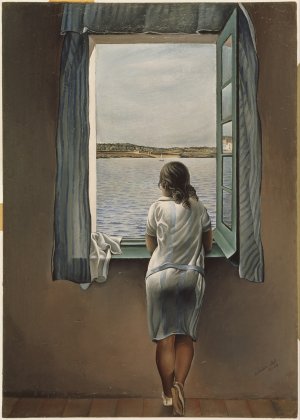 Girl at a window