News. The Dalí Foundation and the Peking University sign an agreement

The Gala-Salvador Dalí Foundation and the Centre for Visual Studies (CVS) of the Peking University signed a collaboration agreement. On behalf of the Dalí Foundation it was its Managing Director, Mr. Joan M. Sevillano who signed the document, and on behalf of CVS it was its Director, Professor LaoZhu (ZHU Qingsheng), who is Professor at Peking University and Chairman of CIHA (the International Association of Art History). The event of the signature has taken place at the headquarters of Instituto Cervantes Peking with the presence of the Cultural Counsellor of the Spanish Embassy in Peking, Mrs. Gloria Mínguez Ropiñón, and the Director of the Instituto Cervantes in Peking, Mrs. Inma González Puy.

Who is CVS of the Peking University?

The Centre for Visual Studies of the Peking University is a national base for the research of traditional Chinese art, Chinese contemporary art and world art history. As a multidisciplinary centre, CVS is on the forefront of contemporary art education and research. The structure of CVS is divided into three parts, covering the relevant areas of science of art: (1) Traditional Chinese Art: it compiles the Chinese iconography and establishes its "dictionary", it also compiles the Complete Works of Han Art as well as its academic publications; (2) the World of Art: CVS assisted in hosting the 34th CIHA Congress in Peking, 2016, it also publishes the International Journal of Art History, the official journal published by CIHA at Peking University and translates Programmes of the World of Art History; and (3) finally, it is responsible for Contemporary Art: it manages the Chinese Modern Art Archive (CMAA), organises the Annual of Contemporary Art of China and carries out Researches and Exhibitions of Contemporary Art.

China has become a priority country for the Dalí Foundation, since it offers many opportunities in the artistic, academic and legal field, mainly in terms of the Intellectual Property Rights.

This agreement aims at creating a framework that clearly defines a strong and long-lasting collaboration between these two institutions. A cooperation programme that allows them to promote Salvador Dalí's art in China by developing cultural activities and divulging knowledge among the Chinese audience of Dalí's works of art. It also allows for a strong support in Europe of CVS activities.

Why is this agreement so important?

This is an agreement of strategic importance for the Foundation because it is a first step in the establishment of alliances with a first-level partner highly recognized in China. A most suitable partner to strengthen the academic and informative mission of the figure and artwork of Salvador Dalí in this country. The agreement will allow the development of various projects -currently under discussion- and will help to create a network of collaborators that will serve as a basecamp for the overall activity of the Dalí Foundation in China and as a bridge between China and Europe, assisting the divulging mission of CVS.

How does this agreement materialize?

The first project will consist on the translation into Mandarin and interpretation of the Catalogue Raisonné of Salvador Dalí's Paintings and his access to the Chinese public. To this end, the Centre for Visual Studies will collaborate with the College of Hispanic Philology and the School of Translators of Peking University to optimize the translation and contextualize the content, thus facilitating a better understanding of Salvador Dalí's work. It should be emphasized that the Catalogue Raisonné of Paintings is one of the Foundation's major academic projects to which significant resources have been dedicated over the last years. It is published online in Spanish, Catalan, English and French. It is universally accessible through the Dalí Foundation's website. It will be the same for the Mandarin version.

The collaboration of the Spanish Embassy and the Instituto Cervantes

The event has been held at the headquarters of the Instituto Cervantes Peking and has had its support. It has also had the coordination of the Cultural Counsel of the Spanish Embassy in Peking. 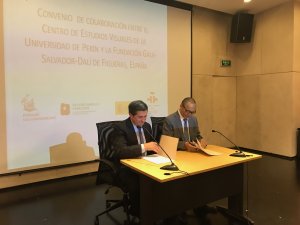 Sevillano and LaoZhu while signing the agreement