News. Third documentary by the Dalí Foundation awarded by AVICOM

Yesterday evening 14th June the documentary The Secret Life of Portlligat. Salvador Dalí's House was awarded with the Golden Prize in the category of museums feature films given by AVICOM (International Committee for Audio-visual and Image Technologies, the Audio-visual section of ICOM). The prize was delivered to Jordi Artigas, coordinator of the houses-museum of Púbol and Portlligat, from the Dalí Foundation. The prize ceremony was held at John Amos Comenius Museum, in the Czech Republic, in the FAIMP 2.0, Audio-visual and Multimedia International Festival on Heritage and Museums. It is a competition that has an international jury of experts who analyse the best productions in the world of museums.

The premiere will be held at Sala Art i Joia in Cadaqués on 1st July at 7:30 p.m. See the teaser and a section devoted to the project.

Thirty-four projects have been submitted in this year's edition which compete in the categories of short, medium-length and feature film. Among the finalists, there are the National Tetryakov Gallery in Moscow, the Kremlin Museums and the Museum of the city of Espoo (Finland).

This is the third time the Dalí Foundation submits an audio-visual project and wins the Golden award in the feature film category. In 2014 the documentary Dalí-Pitxot. The Allegory of Memory won the first international prize and in 2015 the same prize went to the project Dalí's last masterpiece. All of them have been produced by the Dalí Foundation and filmed by DocDoc Films.

Script: Montse Aguer, director of the Dalí Museums, of the Dalí Foundation, and David Pujol of DocDoc Films

The house that Salvador Dalí built, the only lasting home and studio he ever had, provides a narrative thread for the story of his life and work, a biography and a creative oeuvre that span the greater part of the twentieth century. This documentary sheds new light on the painter's intimate and abiding connection with the landscape of Cadaqués, Portlligat and Cap de Creus, a landscape in which he immersed himself, and one that shaped and determined him. At the same time, it explores lesser-known aspects of his personal life, in particular, the relationships with his father and his sister -and first model- Anna Maria: relationships that in turn help us to understand key elements of his work and his life. To know the house-cum-studio at Portlligat is to deeply understand Salvador Dalí, is to know Dalí and Gala in their habitat, is to have access to the painter's sancta sanctorum.

The premiere will be held at Sala Art i Joia in Cadaqués on 1st July at 7:30 p.m. 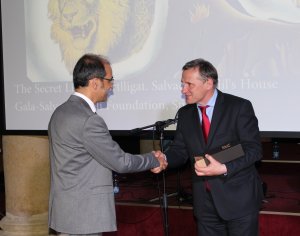 Jordi Artigas being given the AVICOM Prize