News. Documentary on Dalí and his studio in Portlligat

The Fundació Gala-Salvador Dalí and the Cadaqués Town Council are pleased to inform you that this evening the documentary The secret life of Portlligat. Salvador Dalí's House a has been presented at Sala Art i Joia in Cadaqués. It is an audio-visual project produced by the Dalí Foundation and filmed by DocDoc Films. By visiting the House, we are invited to take a trip to the life and work of Salvador Dalí.

Technical description of the documentary

The house that Salvador Dalí built, the only lasting home and studio he ever had, provides a narrative thread for the story of his life and work, a biography and a creative oeuvre that span the greater part of the twentieth century. This documentary sheds new light on the painter's intimate and abiding connection with the landscape of Cadaqués, Portlligat and Cap de Creus, a landscape in which he immersed himself, and one that shaped and determined him. At the same time, it explores lesser-known aspects of his personal life, in particular, the relationships with his father and his sister - and first model - Anna Maria: relationships that in turn help us to understand key elements of his work. To know the house-cum-studio at Portlligat is to deeply understand Salvador Dalí.

Following on from the documentary Dalí's Last Masterpiece, which took us inside the enigmas of the artist's last great work, his Theatre-Museum in Figueres, this second part of the trilogy invites us to discover Dalí's life and work in relation to his house at Portlligat, the only studio of his own he ever had, and its exceptional setting in a landscape that inspired and influenced him profoundly. Here again it is Salvador Dalí himself who guides us on this journey into a very particular geography.

Montse Aguer declares that "the aim of this project was to make better known the only real home and studio that Salvador Dalí ever had. This house-cum-studio was the refuge of the artist and Gala, at the very heart of the only landscape in which it truly belonged: that of Portlligat, Cadaqués and Cap de Creus. A landscape that conditioned and stimulated the painter. I would even dare to say it gave him his identity. Dalí identified with it completely. The house, every inch of which is studio, is the key to understanding Dalí's cosmogony. This is where he experimented, and also the sacred place where he practised every day, obsessively, the ceremony of the art. Art: Dalí's vital choice, and his passion".

David Pujol says: "I wanted to show Dalí in his studio. The painter in his sanctum sanctorum. The man in his habitat. And Gala. And a biography: full, as all biographies are, of nuances and radical breaks. From family ruptures to ruptures as bloody and devastating as wars. I wanted to capture the constant to-and-fro between everyday life and exile, between interior and exterior, between intimacy and extraversion".

International Award given by ICOM

Last 14th June, the documentary won the Golden Prize of AVICOM (audio-visual section of ICOM) in the category of feature films of museums. 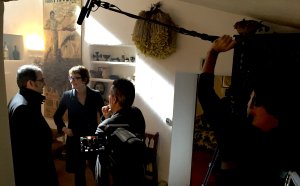 Shooting at Dalí's house in Portlligat