News. Information about the exhumation of Salvador Dalí's remains

The Fundació Gala-Salvador Dalí informs that during the night of July 20th to 21st, the remains of Salvador Dalí, buried under the dome of the Dalí Theatre-Museum in Figueres, were exhumed without incidents.

Here is the video of the press conference in Catalan, Spanish and French.

The course of events has been as follows:

The exhumation procedure has started by putting up marquees to maximize discretion and privacy, and everyone present has been asked to hand in mobile phones and electronic devices to avoid any recording of images.

Then, a pulley has been mounted to lift the tombstone under the dome and it has been lifted without incidents.

From that moment, only a small representation of the parties and of the court entourage have remained inside.

Once the tombstone has been lifted, the tomb has been accessed, and also the coffin, two meters deep. Later, it has been opened by specialists.

After the extraction of biological samples by the coroners, the coffin has been closed again and returned to its original location. Immediately afterwards, the tombstone has been repositioned and the judicial intervention has concluded.

The exhumation process has been definitively concluded and the cleaning work has been carried out so that the museum is ready for opening at its usual time at 9 a.m.

The procedure has been designed with the aim of minimizing the impact on the museum's building (a building protected and catalogued), and the impact on the tomb of Salvador Dalí and his remains; always trying to safeguard - as much as possible - the intimacy and memory of the Master.

The body is being exhumed for a test requested by Ms Pilar Abel Martínez as part of the ongoing legal proceedings in which she demands to be named the daughter of Salvador Dalí, accepted by the Court despite opposition from the Foundation and the Spanish State, who act as defendants in the case.

On 30th June 2017, the Foundation submitted an appeal to oppose this test which failed to stop it.  This appeal, also seconded by the Spanish state, still remains unsettled and yet the exhumation has been performed.

In the late morning of 7 July 2017, the Foundation was served a summons and injunction order stating that the exhumation would go ahead on 20 July 2017 at 9.30 am, and requesting the Foundation to allow the judicial delegation access to the remains and to indicate whether it intends to manage the required works.

On Tuesday 11th, the Foundation notified Figueres City Council of the summons and injunction order, given that it is the owner of the Dalí Theatre and Museum building, it is a listed building and the exhumation requires works to be carried out on the said building. The council responded three days later, indicating the municipal permits and authorisations that would be required to carry out these works.

After receiving the summons and injunction order, the Foundation carried out a study of the works required at the Theatre-Museum in order to perform the exhumation, of the best way to access to the remains of Salvador Dalí, and of the resources and materials which would be needed, in addition to the problems posed by the fact that this is a museum open to the public with a high number of visitors given the time of year, and with many bookings already paid for and confirmed.  In addition, with a view to minimising any losses suffered by visitors travelling to Figueres to visit the museum, the Foundation stopped accepting bookings and pre-sales of tickets for the 20th.

After performing this study, from which it emerged it would be highly problematic to carry out the exhumation works on the 20th at 9.30 am, the Foundation declared this to the court, presenting the major inconvenience these works would pose, the considerable losses they would cause and the risks for safety and public order. It also declined to manage them or assume any responsibility, proposing that they be carried out outside the museum opening hours, either on the night of the 20th, on any other night during the month of July, or on any Monday from October when the museum is closed.

Finally, and in view of the arguments submitted by the Foundation, on the 18th the Court agreed to carry out the exhumation on the night of the 20th, and under these circumstances the Foundation agreed to manage the works, in order to ensure the utmost preservation of the Dalí's work.

After completing the exhumation, the Foundation declared that:

It considers the exhumation performed on Salvador Dalí's remains entirely inappropriate, for the reasons presented in its judicial review:

The court order granted is not reasoned and is entirely ungrounded.

There is no evidence that claimant Pilar Abel Martínez's claim has any legal basis, as the only grounds provided constitute a notarial statement from a woman who claims to be a friend of the mother, stating that the latter told her that her daughter's father was Salvador Dalí.

Before agreeing to such an invasive act as the exhumation of Salvador Dalí in a museum, the claimant Pilar Abel Martínez - as proposed by the Foundation and the Spanish State - should have been required to carry out a DNA test to compare her DNA with that of her legal father (deceased) or her brother, to thereby obtain all available evidence that she is not their daughter or sister.

Despite its total disagreement with the exhumation, the Foundation has respected the court decisions and cooperated in its completion, but it does not share the fact that neither the claimant in proposing the test, nor the Court of First Instance no. 11 of Madrid in granting it, had the foresight to act accordingly based on the fact that Salvador Dalí's remains are located in the Theatre and Museum of Figueres (which receives around 4,000 visitors a day at this time of year) and the fact that it is a listed building owned by the council.  It is grateful that the Court of First Instance no. 8 of Figueres mediated to at least allow for the exhumation to be carried out at night.

The Foundation reserves the right to take any necessary actions to demand liability as a consequence of the important damages and costs that this exhumation has caused. 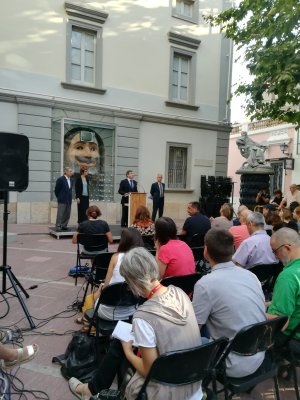