Today the new temporary exhibition at Púbol Castle was officially inaugurated, entitled Women photograph Dalí. It will be on display from 15 March 2018, when the castle reopens its doors, until 6 January 2019.

Attending on behalf of the Foundation were director of the Dalí Museums, Ms. Montse Aguer, and the curators of the show, Ms. Rosa Maurell and Ms. Bea Crespo, from the Centre for Dalinian Studies. Montse Aguer is responsible for the scientific direction of the project. The exhibition has been created in collaboration with the "la Caixa" Banking Foundation, which was represented by the director of its Cultural Area, Mr. Ignasi Miró.

This year's temporary exhibition at Púbol seeks to increase the visibility of the work of fourteen modern, well-travelled and free-spirited women who chose photography as their form of expression and whose common denominator was Salvador Dalí. The exhibition invites visitors to delve deeper into a representative part of Dalí's biography, and the inseparable binomials of life and work, persona and performance.

The exhibition includes 48 photographs complemented by a documentary section with books, magazines and clippings connected with the photographers and the work on display. This section also contains an extract from an interview with Suzy Embo, in video format, which conveys her testimony of encounters she had with Salvador Dalí and her experiences as a woman photographer.

The carefully curated selection of images displayed in the exhibition forms part of the Dalí Foundation's collection, reminding us, once again, of its quality and wealth. It is the first time that Púbol Castle has devoted a temporary exhibition to the women who photographed the artist.

Salvador Dalí has been the object and active subject of numerous works related to the photographic medium. We often associate the most iconic representations of the artist with the great names in 20th century photography. We think about Man Ray, Cecil Beaton, Philippe Halsman and Erich Schaal and, on a national scale, about Juan Gyenes, Xavier Miserachs and Francesc Català-Roca. Without doubt, the importance and overwhelming visibility of these unquestionably talented photographers have overshadowed the names of the women who also captured the artist with their cameras and who deserve to be considered and studied in an inclusive analysis for the quality of their work.

The display presents a rich series of works that allow us to trace the evolution of Salvador Dalí's image chronologically, while highlighting the multiplicity of points of view of the authors represented. Firstly, coinciding with the year in which Gala will be the focus of an exhibition curated by Estrella de Diego at the Museu Nacional d'Art de Catalunya (MNAC), we would like to draw attention to Gala's creative side which, on this occasion, she reveals as the author of a magnificent and intimate series of photographs. For the first time, we discover Salvador Dalí through the eyes of his muse.

In the realm of portraits, we would particularly point out, for their beauty and composition, the photographs taken by women close to Salvador Dalí, such as the artist Valentine Hugo, patron of the arts Anna Laetitia Pecci-Blunt and the multi-faceted Gloria Braggiotti. These should be added to the portraits taken by established photographers like Martha Holmes and Liselotte Strelow. Lies Wiegman and Suzy Embo, in turn, offer us a less well-known image of Salvador Dalí, showing him immersed in the process of working and abstracted from the presence of the camera.

In terms of reportage, photographs taken by Denise Bellon for the Exposition Internationale du Surréalisme (Paris, 1938) stand out for their documentary and aesthetic value, as do the images taken by Karen Radkai -one of international publisher Condé Nast's most prestigious photographers- at the Beistegui Ball (Venice, 1951). Also highly significant are the photographs by Yvonne Halsman, wife of the renowned portraitist Philippe Halsman, which bear witness to the process of creating the photograph In Voluptate Mors (1951) and, at the same time, reveal her cultivated eye and considerable knowledge of the photographic medium.

Finally, the work of Marcia Keegan and Michelle Vincenot show how Salvador Dalí used photography to document the artistic actions and events he organised and in which he held himself up as a work of art.

The research carried out by the two curators, Rosa M. Maurell and Bea Crespo, involved exhaustive and, in some cases, even detective-like investigation that has allowed them to contextualise the images, most of them previously unseen or little known, while others are firmly present in our imagery. Thanks to this painstaking work it has been possible to delve deeper into a representative part of Dalí's biography, and the inseparable binomials of life and work, persona and performance.

The documentation stored in newspaper libraries and archives, as well as the information provided by people close to our subjects -which we include in the Memorabilia section of the catalogue-, have been fundamental in bringing to light the biographies and the work we are looking at. With some exceptions, such as Denise Bellon, Martha Holmes, Marcia Keegan and Suzy Embo, obtaining information about the photographers represented has generally been rather difficult. Some, such as Gala and Yvonne Halsman, dedicated much of their energies to supporting the promising careers of their respective husbands and always remained discretely in the background. Karen Radkai excelled with her work for Vogue, yet her professional career has barely been studied. Others, such as Valentine Hugo, Anna Laetitia Pecci-Blunt and Gloria Braggiotti, are appreciated for different facets related with the world of art and not as much as the authors of some wonderful photographs. Liselotte Strelow and Lies Wiegman, both from the north of Europe, are famous above all in their home countries, while Barbara Sutro and Michelle Vincenot are practically unknown by today's audiences.

The staging of the exhibition was designed by Pep Canaleta from 3carme33 and the graphic design is by Alex Gifreu.

The display is organised by colours, as if it were a pantone: each colour is associated with a woman who, with her camera, captured an instant spent with Salvador Dalí. Starting with reds, the background that accompanies many of Salvador Dalí's works, especially in the Treasure Room of the Dalí Theatre-Museum in Figueres, and which is reserved here for the photographs by Gala. The range of earthy colours, ochres, greens and blues evokes different sensory landscapes and draws us into a variety of situations and places, all inhabited by Salvador Dalí.

The catalogue includes texts by Montse Aguer, director of the Dalí Museums, Rosa M. Maurell and Bea Crespo, curators of the exhibition, and also Imma Merino, a cultural journalist, who highlights the exciting lives led by this group of women who sought to break free from the imposed ways of living as a woman. According to Merino, the exhibition is also a discovery of the photographs we present here.

The Memorabilia section contains testimonies from relatives and people close to some of the photographers represented, such as Luc Dubos, Harmon Houghton, Irene Halsman, Oliver Rosenberg Halsman and Marton Radkai. In the case of Suzy Embo, we had the good fortune to be able to obtain the direct testimony of the photographer herself.

The catalogue was designed by Alex Gifreu and is sponsored by "la Caixa" savings bank.

In parallel, promotional and publicity material has been produced by DocDoc Films, consisting of two audiovisual capsules, which are available from the Dalí Foundation website. 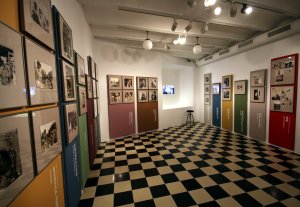