News. Exhibition of portraits of Salvador Dalí by Robert Whitaker

A new temporary exhibition was presented to the media at the Dalí Theatre-Museum in Figueres. It is devoted to portraits the English photographer Robert Whitaker took of Salvador Dalí in Portlligat and Paris from 1967 until 1972.

Montse Aguer, director of the Dalí Museums, presented the exhibition to the media today. It is entitled Salvador Dalí. Robert Whitaker. 1967-1972 and will be on show for one year in the Loggias Room.

It aims at presenting Dalí as the protagonist of his museum. On this occasion, we show 27 pictures by Robert Whitaker which were known but have never been exhibited together. It is a carefully selected sample of the many portraits that the English photographer made of Salvador Dalí in his home-cum-studio at Portlligat and in Paris, between 1967 and 1972. They belong to the Robert Whitaker collection consisting of 707 images recently acquired by the Dalí Foundation with their corresponding rights. Dalí and Whitaker first met in 1967, when the art historian Douglas Cooper introduced them to one another. Whitaker was already a highly-regarded photographer, known for having documented the Swinging Sixties, notably in his pictures of The Beatles.

One of the photos in the exhibition is a portrait of Salvador Dalí at the Hotel Meurice in Paris, where he regularly stayed on his visits to the city, with a prominently displayed iconic image of John Lennon in the background. Whitaker visited Dalí at Portlligat on many occasions, and the relationship they established was both artistic and personal. These portraits of Dalí, many of them staged, were taken in several rooms of the Portlligat house -one of the vertices of the Dalinian triangle- and convey a strong sense of shared provocation and irony.

Who was Robert Whitaker?

Robert Whitaker was born in 1939 in England. He witnessed a tumultuous decade. The images that reported those years were modelled by photographers like him. The affinity between painter and photographer was instant and Dalí valued every minute of Whitaker's company. Whitaker understood the work of the painter and in every photograph created a visual memory of his time spent with the artist. The friendship that the photographer shared with Salvador Dalí allowed him to witness extravagant celebrations, artistic experiments and the artist's work process. Whitaker's photographs have immortalised the Dalinian image in dynamic photographs. His camera acted as an extension of his eye and captured the creative nuances and the essence of the artist. Through intimate and energetic images, the exhibition shows the closeness, understanding and reciprocity that united the painter and the photographer.

The staging of the exhibition was designed by Pep Canaleta of 3carme33 and graphic design is by Alex Gifreu. 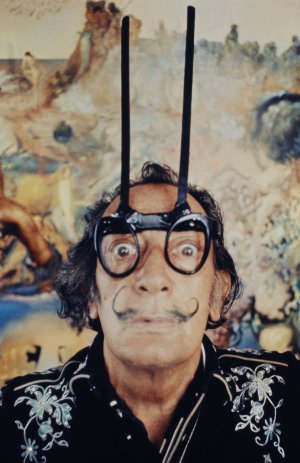