The Ascension of Saint Cecilia 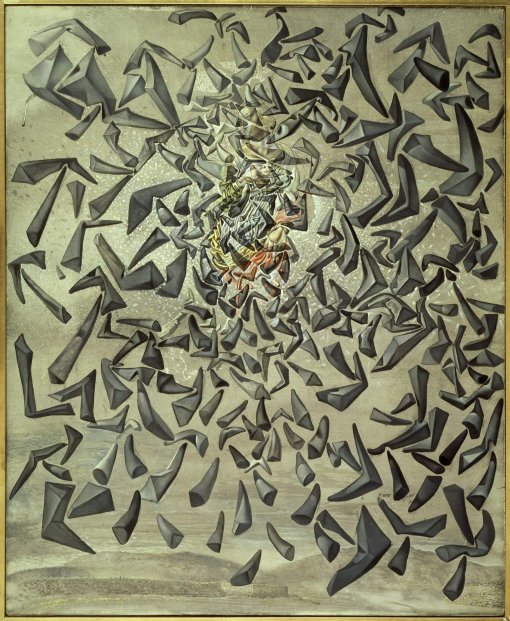 The loan by the Museo del Prado in Madrid of Raphael's oil painting Madonna of the Rose[1] to the Dalí Theatre-Museum, as part of the celebration of the Madrid museum's bicentenary, is the starting point of the exhibition Dalí-Raphael, a Prolonged Reverie. The title comes from a statement by Dalí in his treatise on painting, 50 Secrets of Magic Craftsmanship, published in 1948, in which - like Cennino Cennini or Leonardo, among others - he pays tribute to the technique and art of painting, and also, significantly, to the distinction of the artist.

Salvador Dalí, one of the most renowned artists of his century and of ours, affords us a new reading of the work of Raphael and the theme of the ascension in this innovative exhibition in which the two paintings, Raphael's Madonna of the Rose and Dalí's The Ascension of Saint Cecilia[2] - together with drawings, photographs and other material from the artist's studio that shed light on his creative process - enable us to trace some of the ways in which the great Renaissance painter influenced Dalí in his approach to harmony, perspective, perfection, colour, the presence of a particular landscape, and also in the engagement with an ideal of beauty, mysticism and spirituality, all intimately connected, for Dalí, with science and more specifically with nuclear physics and the discontinuity of matter.

In an interview, Dalí, very significantly, declared: 'What is important is that we must paint the subjects in a way that corresponds to the time we live in, 1951; this means that if Raphael painted a virgin according to the cosmogony of the Renaissance, today this cosmogony has varied. The same subject that Raphael painted, if Raphael painted it today, because he would have other knowledge (nuclear physics, psychoanalysis, for example), he would paint as well as then, but he would respond to today's cosmogony. And the religious theme is, for me, the oldest and the most current; but it must be treated according to the scientific knowledge of our time [...].'3]

From a very early age Dalí ​​expressed a deep admiration for Raphael, an admiration that also manifested itself in significant aspects of his development, such as the creation of a persona or character: 'I had let my hair grow as long as a girl's, and looking at myself in the mirror I would often adopt the pose and the melancholy look which so fascinated me in Raphael's self-portrait, and whom I should have liked to resemble as much as possible.'[4] Also worthy of note is the Italian painter's influence on Dalí's overall artistic evolution, from Self-Portrait with Raphaelesque Neck,[5] (c. 1921)  to the stereoscopic set The School of Athens and The Fire in the Borgo,[6] or the oil painting Raphaelesque Hallucination,[7] (c. 1979). We should bear in mind here that the comparative table in Dalí's treatise 50 Secrets of Magic Craftsmanship ranks Raphael immediately after Vermeer among the greatest painters of all time. Dalí rated Raphael's drawing, genius, composition, originality and mystery especially highly.

Dalí's work abounds in references to Raphael and the Renaissance, which allow him to class himself as a good artist in relation to his contemporaries ('I am a bad painter. If I compare my canvases with those of the Renaissance, with those of Raphael, for example, I realize the total disaster of all my work. But that does not prevent me, thanks to my style, from being one of the best contemporary artists.'[8] and at the same time to associate the Renaissance with both mysticism and science. In the work that concerns us here, Dalí took a painting by Raphael, and its central element, Saint Catherine of Alexandria, and interpreted them in a new light at a particular turning point in his career: this was the mystical-nuclear stage, in which he expressed himself in new languages grounded in the legacy of the great masters of painting, because his declared goal now was to become classic.

Dalí became interested in the innovations of contemporary American painters and their visual experiments in the mid nineteen forties, and combined this with his appreciation of the classic works of the great tradition in his quest to represent both external and internal reality in order to 'shake up' the viewer. Dalí appeals to our subconscious, our desire and our memory and to our ability to interpret the world in a polysemous way. He sought to apprehend the reality beyond the human eye, concerned as he was to engage with the viewer's mind.

The Ascension of Saint Cecilia, painted in his studio at Portlligat in or around 1955, is one of a series of works in which classicism is very much in evidence and in which Dalí at the same time invokes both nuclear physics and the discontinuity of matter. The picture is a focal composition in which the chromaticism is centred on the discontinuous figure of the saint, exploded into particles intermingled with forms based on the rhinoceros horn, a key symbol in Dalí's work.

The painter was drawn to the symbolism of the rhinoceros horn, especially in the nineteen fifties, as a traditional emblem of purity and chastity and at the same time for its sexual connotations, because it has been supposed to be a potent aphrodisiac; he was also interested in the horn as constituting a logarithmic curve and a perfect form. In the lecture he gave at the Sorbonne in Paris on December 17, 1955, entitled 'Phenomenological aspects of the paranoid-critical method', Dalí drew attention to the relationship he had established between a painting by his admired Vermeer, The Lacemaker, and the rhinoceros horn. Significantly, Dalí declared: 'Raphael painted only with profiles of forms very similar to the logarithmic curves that are present in the horn of the rhinoceros.'[9]

Regarding the figure of the saint, in 1944, in an almost premonitory passage in his novel Hidden Faces, Dalí observes of one of his characters, Betka. that 'she was a Saint Cecilia', and specifically that this was because she felt 'so weakened [...] so disembodied and as if held up by the absence of weight which the almost absolute unconsciousness of her own movements imparted to her. She had the curious sensation, which she had never yet experienced, of perceiving the effect of her own movements only a few seconds after she had made them.'[10] Once again here we are struck by the close connection between the artist's literary and pictorial work and reminded that he liked to refer to himself as a thinking machine.

It is also interesting to bear in mind here Dalí's working process, which is very graphically captured in a photograph that can be seen in the exhibition. The painter has placed at the top of his easel, as a model, a print of Raphael's Saint Catherine of Alexandria, and has drawn a grid on the reproduction of the painting in a book containing works by the Italian master, currently conserved in the library of the Centre for Dalinian Studies. The numerous photographs in the exhibition document Dalí's various studios, and especially his only really continuous workplace, at Portlligat, where we see prints affixed to the easel or mounted directly on the canvas of the current work in progress, or framed and hung on the walls of his library or his various studios.

Dalí's ideal landscape of Portlligat and Cadaqués is another constant in his work, and in this regard, too, he was very close to Raphael, the painter from and of Urbino. Both artists drew on an ultra-local landscape that they made universal. In the words of the Empordà painter: 'I need the localism of Portlligat just as Raphael needed the landscape of Urbino, to arrive at the universal by the path of what is particular.'[11] Dalí depicts that landscape in the lower half of The Ascension of Saint Cecilia, with the geology of the rocks and a sea that becomes a sky or a sky that becomes sea, in an intended confusion.

With regard to chromaticism, Dalí goes straight to the essential in his experimentation with the contrast between the basic colours concentrated around and oriented towards the figure of the saint and the grey that presides over the painting. Dalí frequently referred to the optical grey of Velázquez, another major influence, which effectively reinforces the rest of the palette and especially the white and the luminous yellow of the discontinuous particles surrounding the figure of the saint, which call to mind another recurring Dalinian symbol, that of phosphenes as allusions to a lost intrauterine paradise.

With this exhibition we have the satisfaction of fulfilling one of Salvador Dalí's wishes, that of having one of his paintings hang next to a Raphael, in the present instance in a show that, in Dalí's own poetic expression, is the result of a 'prolonged reverie', as he explains to us in more detail in his treatise on painting, 50 Secrets of Magic Craftsmanship:

'And I shall assume that your picture has resisted all these tests, and still others, like the fascinating one of representing it to yourself in imagination, in the course of a prolonged reverie, hanging in a museum next to one of your preferred Raphaels.'[12]