The Fundació Gala-Salvador Dalí is a private cultural institution with the mission, as stated in its bylaws, to "promote, boost, divulge, lend prestige to, protect and defend in Spain and in any other country the artistic, cultural and intellectual oeuvre of the painter, his goods and rights of any nature; his life experience, his thoughts, his projects and ideas and artistic, intellectual and cultural works; his memory and the universal recognition of the genius of his contribution to the Fine Arts, culture and contemporary thought".

It was created on 23 December 1983 at Púbol Castle at the express wish of Salvador Dalí Domènech. Right from the outset, Dalí presided over and directed the Foundation in person. His death on 23 January 1989 opened up a period of transition until, in 1991, the Board of the Gala-Salvador Dalí Foundation appointed Ramon Boixadós Malé President of the institution until August 2017. Jordi Mercader succeeded him afterwards.

Since 1991, the Foundation has updated its operational structure in view of the need to create a dynamic and effective organisation able to generate new projects in order to carry out the task entrusted to it by Salvador Dalí.

The logotype of the Foundation was designed by Dalí himself. It commemorates the journeys on boat of Dalí and Gala in Portlligat. 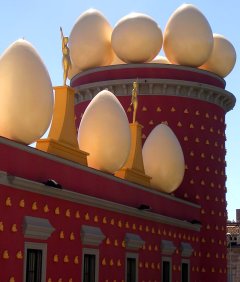 "Purpose: article 4- The purpose of the Foundation is to promote, foster, disseminate, enhance prestige, protect and defend..."