Dalí’s Last Masterpiece, by the writers

To visit the Dalí Theatre-Museum in Figueres is to immerse oneself in Dalí's universe, in the evolution and understanding not only of his work but also of the history of art, to which he constantly refers, in a profound respect for tradition. It is to venture into the heart of a labyrinth without any chronological order, a labyrinth in which interpretations abound because, as Dalí himself said, the meaning of many of his works remained obscure even to him. It is to become an active spectator, an agent in an act of creation, both timeless and transient. It is to embrace the possibility of personalizing the intellectual experience and/or the moments of cultural leisure that correspond to plunging into the museum space, ultimately to give meaning to the work, its meaning par excellence.
The Gala-Salvador Dalí Foundation is committed to making this space, this theatre of memory, accessible to the greatest number of people and, yet more ambitiously, to demonstrating a way of understanding art and creation that goes far beyond simply explaining an artist's work.
What we have sought to do with this documentary is evoke Dalí, his work, his thought and his personality, and also the last great creation of this remarkable artist: the Dalí Theatre-Museum. A place into which he poured his entire universe and to which he devoted all his efforts, and a place that synthesizes a whole life dedicated to art.

Theatre of memory, dream architecture, world of optical illusions ... an 'imperialist and surrealist museum', in Dalí's own words. These are concepts that continually came to the fore as we worked on the script of the documentary with Montse Aguer. One of the main challenges, then, was how to apprehend visually the space characterized by these definitions. This was no easy task, because, once inside, we found that the works came to life, thanks to the way they reflect the sun and to the effects of the light, changing from one moment to the next. The Theatre-Museum is full of visual traps and it was only after failing with our first shots that we came to realize that Dalí, from the beyond, was still playing with us. The visual legacy he has left us is constantly changing. Nothing is stable. In the shifting light and shade the works merge, and if one looks at them for a few minutes they almost seem to be inviting us to chaos and contemplative confusion. For the first time in filming the works in the Dalí Theatre-Museum we have allowed ourselves to surrender to the creative weightlessness that the artist has given us here. The documentary is counterpointed by the interventions of Dalí himself, of Montse Aguer and of the painter Antoni Pitxot, a close friend of Dalí's and Director of the Theatre-Museum. In perfect harmony, these three voices reveal some of the secrets of Dalí's last great work: his museum. 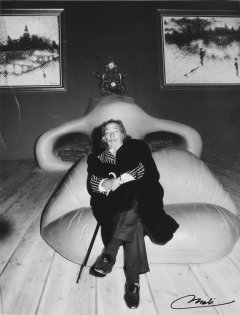