The first decision the producer took to meet the challenge of filming the Dalí Theatre-Museum was to build a small, lightweight unit able to move fast and provide maximum image quality. As the light in the Theatre-Museum changes substantially throughout the day and brings different nuances to the site, it was therefore necessary to adapt to these changes without losing the cinematic narrative style that the director, David Pujol, needed to present the different rooms.

It was decided to use Canon 5D Mark III and 6D DSLR cameras and to shoot in Full HD 1920x1080 25p, gear that was completed with a slider and a crane for very quick arrangement of tracking shots and vertical movement. A Phantom 2 drone was used to achieve previously unseen perspectives and make impossible approach movements. Its size and manoeuvrability allowed for museum interior shots and provided unimaginable framing. By tuning a Phantom 1 and reversing the stabiliser it was possible to take hitherto inconceivable upward shots of the dome.

Moving with the drone from room to room, along hallways and stairways, was not possible because of the geography of the site and the danger it posed to works. The producers therefore hired one of Spain's best Steadicam operators, Ramón Sánchez, who "flew" the camera around the whole Theatre-Museum complex for three exhausting days.

The intention was not to distort light, glare, shadows and double images, which are ever present in every corner of the Theatre-Museum, with lighting, but for natural light to be used everywhere while some points would be subtly emphasised with small LEDs whenever there was no other option. Preserving the darkness and shadows was paramount for the team.

In postproduction the general chroma of the documentary was balanced without the use of filters in order to prevent distortion to the reality of the Theatre-Museum and to respect it in full. 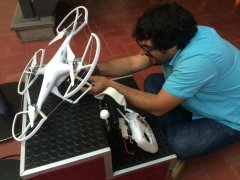