Dalí and the Myth of Narcissus

Of all the extant versions of the myth of Narcissus, the best known is that of Ovid's Metamorphoses, according to which Narcissus is the son of the nymph Leiriope and the river god Cephissus. Upon his birth, the diviner Thiresius makes a prediction to his mother that her son would have a long life "if he does not get to know himself".

In his youth, Narcissus's beauty made him an object of desire for many young people of both sexes, but he rejected them all. Among his pretenders, the nymph Echo was madly in Love with him, but he paid no attention to her, and she, in desperation, withdrew to a solitary place in which nothing remained of her but her voice.

Nemesis, taking up the plea of one of his victims, managed, one hot day when they were strolling in a spot where there was a fountain, to get Narcissus to bend down to drink. There, he fell in love with the image he saw reflected in the water - his own image.Unable to reach this image , Narcissus let  himself  die, still bending down over his own image. There, at the place of his death , arose the flower that bears his name, the narcissus.

"There was a fountain silver-clear and bright, which neither shepherds nor the wild she-goats that range the hills, nor any cattle's mouth had touched--its waters were unsullied-birds disturbed it not; nor animals, nor boughs that fall so often from the trees."

This is the description that Ovid gave of this solitary and idyllic spot, a virtually unspoiled place difficult of access, and one that immediately brings to mind the geological nature of Cap de Creus point on the northernmost coastline of Catalonia. In the photo we present, currently kept at the Centre for Dalinian Studies and most probably taken by Gala herself (we still have the negative from the period), we can see the painter bending down over a pool at the point known as Punta dels Tres Frares at Galladera bay, between Cap de Creus and El Port de la Selva It is a place that can only be reached by sea and one of the few such fully preserved places along the Catalan coastline.

If we look closely at the landscape in Salvador Dalí's painting The Metamorphosis of Narcissus, we will be able to recognise the typical texture of the Cap de Creus rocks, so heavily present in the Dalinian oeuvre.

In Paris in 1937 Dalí published at the Éditions Surréalistes a poem bearing the same title as the painting. He declared - as a kind of educational advice  - that it should be read while contemplating the painting.

According to Dalí, these were the first poem and painting to emerge in their entirety through the application of his paranoid-critical method. And this piece of informatiun  is particularly significant if we analyse the theme of Narcissus, bearing in mind that this myth has laid to an extensive iconography in painting as well as  sculpture and  literature . To mention  only a few, there are  the Narcissus by Caravaggio, the Narcissus at the Fountain by Tintoretto , Narcissus with Echo from a Pompeian painting, and, in literature, the Metamorphoses of Ovid, the Traité du Narcisse by  André Gide (that the painter numbered among the books of  his library) or Paul Valéry's poem.

In his  text, Dalí recommended that the painting be contemplated in a state of "distracted fixation", under the influence of which Narcissus would gradually disappear. The figure emerges on  the left side of the painting, his vague outlines reflected in the wàter: his head resting on his knee, probably bending down to die On the right  side, we can see the double image with the transformation of Narcissus into a hand holding an egg from which the flower of the same name would emerge. Between these two images we can see a group of people, whom the painter calls in his text the "heterosexuals". There is   a Hindu, a Catalan, a German, a Russian, an American, a Swedish woman and an English woman, and they represent the  pretenders of both sexes who approached Narcissus and whom he rejected systematically.

When the poem comes to an end, which is  the death of Narcissus in  Ovid's version and his transformation into a flower, in Dalí's version, love appears in the form of Gala, saving him from that gloomy fate. It is in the final stanza of the poem that  occurs the metamorphosis referred to in the  title:

In the painting, the artist reveals the human drama of love, death and the transformation known in psychoanalysis as "narcissism". In his Introduction to Psychoanalysis, Sigmund Freud defines the term as "the displacement of an individual's libido towards that individual's own body, towards the 'ego' of the subject."

In July 1938, Dalí travelled to London to converse with Freud, and in the course of their meeting showed the psychologist his painting. Freud later remarked: "Until today I had tended to think that the surrealists, who would appear to have chosen me as their patron saint, were completely mad. But this wild-eyed young Spaniard, with his undoubted technical mastery, prompted me to a different opinion. Indeed, it would be most interesting to explore analytically the growth of a work like this ..."

In this oil painting, Salvador Dalí linked the classical tradition of Greek mythology with the latest investigations of science, in this case psychoanalysis, doing so by  càsting a new light on  the myth of Narcissus, so charged with significance for an artist constantly seeking to construct his own image. 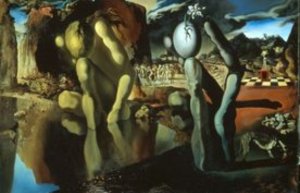