News. Presentation of the new wig in the Mae West Room

Llongueras and the Gala-Salvador Dalí Foundation have remodelled one of the most unusual items in the Dalí Theatre-Museum, the wig which forms part of the installation made by Salvador Dalí and Òscar Tusquets in 1974: the Mae West Room.

To halt the deterioration the original wig had undergone, the Gala-Salvador Dalí Foundation sought assistance from Lluís Llongueras. The hairdresser-cum-sculptor, with his technical team and the collaboration of the Conservation Department of the Gala-Salvador Dalí Foundation, have been working over the last few months to make a new, large-scale wig for the Mae West Room.

Lluís Llongueras was in fact the creator of the original wig for the Mae West Room, installed in 1976 as part of the permanent sculptural montage made two years earlier by Salvador Dalí and the architect Òscar Tusquets, shortly before the inauguration of the Dalí Theatre-Museum. The wig, of large dimensions (4.40 x 3.46 metres), was entered in the Guinness Book of Records as the largest made to date. Lluís Llongueras later went to the Dalí Theatre-Museum on several occasions in order to see to the maintenance of the enormous wig. The deterioration of such a fragile item was nevertheless inevitable over the course of 25 years, and made it advisable that it be replaced by a totally new wig. This new wig has the same characteristics that always made the original one of the key features of the Mae West Room, especially when viewing the installation through the reduction lens that converts the sculptural montage into Mae West's face.

The new wig was made using a new acrylic material (artificial hair that resembles natural hair as closely as possible), fabrics and lining materials (16 metres of each), while the movement of the hairstyle was achieved by gluing on fabric strands nearly a kilometre in length with Contactceys adhesive.

The Mae West Room is one of the most representative zones and amongst those most liked by visitors to the Dalí Theatre-Museum. The installation had its origin in the version that Òscar Tusquets made of the Sofa-Saliva-Lips or Saliva-Sofa at the beginning of the 1970s. Basing his idea on the Saliva-Sofa creation, it was Tusquets himself who suggested to Salvador Dalí a three-dimensional recreation of one of the best-known applications of Dalí's iconography to furnishing, taking as starting point the dual-image technique, the collage The Face of Mae West (Usable as a Surrealist Apartment) (c. 1934-35, The Art Institute of Chicago). Enthused by the idea, in 1974 Salvador Dalí decided to carry out the project in one of the rooms of the Dalí Theatre-Museum. And, to complete the installation, in 1976 Dalí and Tusquets commissioned Llongueras to make the first wig for the Mae West Room. 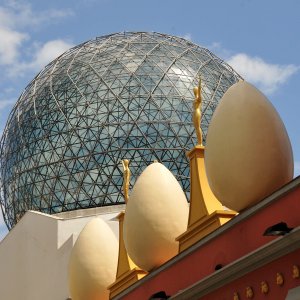