Booking in advance is recommended.

The Dalí Theatre-Museum in Figueres now includes a new temporary exhibition, showing photographs of Dalí taken by Philippe Halsman as part of the Dali's Mustache project.

The exhibition is entitled Variants from Dali's Mustache and will be on display in the Loggias Room from 18 April until 31st December 2016.

The aim of showing Variants from Dali's Mustache is to give greater importance to the presence of the artist in his own museum. To this end, we have chosen images by one of the great photographers of the twentieth century, Philippe Halsman, a Latvian who settled in the United States, with whom Dalí developed a professional relationship of over 37 years. For this exhibition, we have selected 23 photographs that were not included in the book by the two artists entitled Dali's Mustache, published by Simon and Schuster (New York) in 1954. The material presented here is little known and of great value.

The relationship between Dalí and Halsman

The collaboration between Dalí and Halsman began in 1941. They met while working on Labyrinth, a project performed by the Ballets Russes at New York's Metropolitan Opera House in 1941, for which Halsman photographed the costumes designed by Dalí. They continued to work closely together on joint commissions mainly related to ballet, but also generated their own projects such as Dali's Midsummer Night's Mare, Dali Atomicus, Dali Sculpture with Light, and In Voluptate Mors in which models are arranged in the shape of a skull. In 1960, Halsman documented the making of Dalí's film Chaos and Creation.

Philippe Halsman explains the concept of the jointly produced book Dali's Mustache as follows: "In 1954, the growth of Dali's mustache miraculously increased. When the painter returned to New York I was amazed: the points of his mustache were higher than his eyebrows. I saw my duty and started to photograph the play and interplay of his mustache. I needed Dalí's consent and I approached the great surrealist cautiously: 'Books have been written about you and about other painters. But there is no book about a part of their personality, as, for instance, Rembrandt's nose or Picasso's foot. What a tribute to your genius, Dalí! A book to appear -dedicated not to the whole but only to a small part of you!'"

The mounting of the exhibition was designed by Pep Canaleta of 3carme33. The graphic design is by Alex Gifreu. 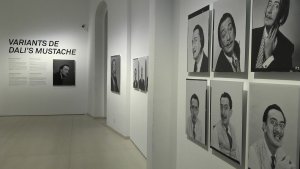 The exhibition at the Dalí museum