Today at 7 p.m. a new Dalí temporary exhibition will be opened at Fabergé Museum in Saint Petersburg (Russia), entitled Salvador Dalí. Surrealist and Classicist. At 1 p.m. a press conference will be held together with a guided visit to the show. Its curator is Ms. Montse Aguer, director of the Dalí Museums, from the Dalí Foundation, and Thomas Clement Salomon, scientific coordinator of MondoMostre, organiser of the exhibition.

The show will be on from 1st April until 2nd July. It was previously seen at Palazzo Blu in Pisa, Italy, from 1st October 2016 until 19th February in a version adapted to the Italian audience.

The press conference was given by the Managing Director of the Foundation, Joan Manuel Sevillano, Thomas Clement Salomon from MondoMostre, and Vladimir Vorochenko, Head of the Board of The Link of Times, the institution that founded the Fabergé Museum of Saint Petersburg, a Museum of which he is the director. Other assistants were Konstantin Sukhenko, Head of the Committee for Culture of Saint Petersburg, and Christopher Forbes, vice president of Forbes Publishing Company. His collection of Fabergé jewellery motivated the creation of the Fabergé Museum.

The official opening will be attended by Russian authorities and representatives from the Spanish Consulate and Embassy. 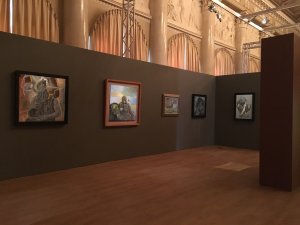