News. Ms. Aguer presents the documental on Dalí in Portlligat

The documentary The secret life of Portlligat. Salvador Dalí's house, produced by the Foundation, was selected to be shown during the inaugural event of the Artecinema Festival in Naples, on 19 October. This international festival of films on contemporary art was launched in 1996 with the aim of raising public awareness of the many different expressions of art.

The presentation took place at the prestigious Teatro di San Carlo in Naples and was led by Montse Aguer, director of the Dalí Museums and co-scriptwriter of the documentary, and David Pujol, director and co-scriptwriter of the project. During the evening, Laura Trisorio, director of the festival, explained that the decision to open this year's edition of Artecinema with this documentary produced by the Dalí Foundation was made, above all, because it offers an innovative vision of Salvador Dalí that goes beyond the stereotype we are used to seeing.

The secret life of Portlligat. Salvador Dalí's house was one of only 25 films selected for the Artecinema Festival, held in Naples from 19 to 22 October, from the 100 that were presented.

The documentary will be shown in Figueres on 29 November at eight-thirty in the evening at the Catequística building, in the presence of Montse Aguer and David Pujol, at an event organised by the Association Friends of the Dalí Museums. 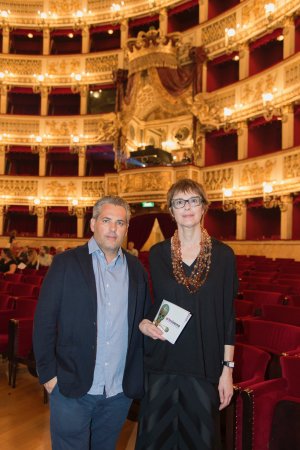