News. Gala/Dalí/Dior. Of art and fashion, the 2020 exhibition

With Gala/Dalí/Dior: Of Art and Fashion the Dalí Foundation begins a new exhibition programme focused on Dalí's fascinating relationship throughout his life with the world of design and fashion. This new policy could only be carried out at Gala's Castle in Púbol. This year's project explores parallelisms between two creators, Dior and Dalí, -but also Gala as a necessary collaborator-, two creators who epitomise the 20th century and who are characterised by an attitude to art that manages to combine technical precision, creative obsession, a desire to go beyond and a sense of mise-en-scène. Art and fashion intertwine to take visitors into this shared imaginary through a painstaking selection of the artist's work, Maison Dior's designs and documentary materials from the Dalí Foundation and Christian Dior Couture collections, two institutions which have begun a promising collaboration. Among the key pieces on show, three models from Maison Dior which belonged to Gala are to be seen, two of which have never been exhibited in Púbol.

Gala's and Salvador Dalí's first contacts with Christian Dior were in Paris in the early 1930s, when the artist, with Gala's determined help, was trying to make a name for himself in the capital of art. Between 1931 and 1933, Dalí exhibited his creations in Pierre Colle's small gallery, of which Christian Dior became a partner in 1931. Notable among the different paintings, drawings and objects from the surrealist period on display are pieces such as Automatic Beginning of a Portrait of Gala, which was first shown to the public in 1933 by gallerist Dior- as well as exhibition catalogues of the 1930s of Pierre Colle's gallery.

"I designed clothes for flower-like women, clothes with rounded shoulders, full feminine busts, and willowy waists above enormous spreading skirts. Such a fragile air can be achieved only by solid construction." Christian Dior

On 12 February 1947, Christian Dior revolutionised female fashion and aesthetics with the presentation of his first collection, which would soon come to be known as the New Look. The couturier carved out a place in the world of fashion design and subverted the codes of haute couture as Salvador Dalí had done years earlier with painting.

Gala - considered one of the most influential muses of the 20th century - quickly saw in Dior's style an opportunity to create and embellish her own image. Closely following the designer's ideas, she showed her taste for fashion in all her public appearances revealing a modern and sophisticated style. This is apparent in Dior's ensembles in her personal collection, which she wore in different events and vernissages accompanied by Dalí.

«On the evening of the prestigious Bestéguy [sic] ball in Venice, I was in a fever of excitement. [...] I had asked Christian Dior to make me a disguise as a seven-meter-tall giant so I could look down on everyone else. The city was in transports, and my success so great that, twenty years later, I still dream of it some nights...» Salvador Dalí.

On 3 September 1951 one of the most memorable and legendary events of the last century took place in Venice. Its architect, the extravagant multimillionaire and decorator Carlos de Beistegui, assembled at the Palazzo Labia the crème de la crème of high society and great figures from the period in an event announced as "The ball of the century". Aristocrats, movie actors, socialites, artists and fashion designers, among other illustrious guests, showed off the costumes created specifically for the occasion. Among the most memorable were the giants conceived by Salvador Dalí and Christian Dior with the mediation of Gala and help from Pierre Cardin. The giants' spectacular entrance into the ball, preceded by a parade through the streets of Venice, was one of the high points of the soirée.

By means of an audiovisual produced for the occasion, some little-known images come to light. They come from Italian collections such as Archivi Farabola and Archivo Fotografico Giacomelli. Among the photographs on display, there are images by internationally renowned photographers such as Willy Rizzo and Robert Doisneau.

For the first time, the temporary exhibition is held at the former penthouse of the Castle. They used to take place in the old kitchen, which has been refurbished as the kitchen it formerly was. This will give the visit a coherent museographical discours. The staging of the current exhibition has been designed by Pep Canaleta from 3carme33, and the graphic design is by Alex Gifreu.

The catalogue includes texts by Joana Bonet, Montse Aguer, Bea Crespo and Clara Silvestre. It is published both online and in paper in 4 languages (Catalan, Spanish, English and French) and can be downloaded for free in the website.

The catalogue was designed by Alex Gifreu and is sponsored by "la Caixa". In parallel, promotional and publicity material has been produced by DocDoc Films, consisting of an audiovisual capsule available from the Dalí Foundation's website and social media. 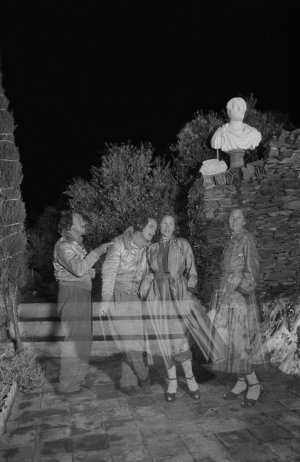