News. Reopening of the Dalí Theatre-Museum with an exhibition on Surrealism

The Dalí Theatre-Museum reopens its doors today after a 4-month-closure due to the pandemic. It does so with the new temporary exhibition Dalí: I am Surrealism!" Landscapes Outside of Time, which brings together twelve works from the Surrealist period for the first time. The Fundació Gala-Salvador Dalí presented them during a press conference with Montse Aguer, Director of the Dalí Museums and Curator of this exhibit, together with Carme Ruiz, Chief Curator of the Foundation and Deputy Curator of the show.

There are eleven oil paintings dating from year 1926 until 1937, as well as Poetry of America (1943) which shows how the Surrealist features are still present in Dalí's later work.

They are paintings meticulously executed on canvas, cardboard and wood that make up a good example of what Salvador Dalí's contribution to the Surrealist movement was. Because of their relevance they have been requested in international exhibitions such as Russia, Japan or Australia and that is why they have never coincided in the same place.

"I am Surrealism!". This maxim of Salvador Dalí's has become prophetic. He made himself the most famous and admired of the Surrealists, and his iconography has long had a place in the popular imaginary. Dalí embodies transgression, freedom and rebellion; the power to blur the line between art and everyday reality.

In the artistic sphere, Dalí is also known for being the creator of the paranoiac-critical method, an irrational means of apprehending reality, with double or invisible images which invoke the phenomena of perception or interpretation of a reality far more complex than it appears at first glance. He is also characterised by his landscape, a constant and eternal reference in his work that has become universal and a characteristic that allows him to translate his surrealist imagery into visual terms, and to enhance the symbolic function of images in pursuit of a deeper reality. Surrealism is consubstantial with Salvador Dalí's idiosyncrasy.

As the painter wrote, 'Man is entitled to the enigma and the simulacrums that are founded on these great vital constants: the sexual instinct, the consciousness of death, the physical melancholy caused by time-space'. He placed this enigma and these simulacra, poetically or objectively, in his Surrealist landscapes.

Through the landscape that Dalí reflects in his work we can configure his Surrealism, following André Breton, he defined thus: "Surrealism: Pure psychic automatism, by means of which it is proposed to express, be it through writing, verbally or in any other way, the real functioning of thought; of the dictation of thought in the absence of all control exercised by reason and outside all moral or aesthetic concerns." Dalí made his own definition of Surrealism which was included in André Breton's Manifesto of Surrealism, 1924.

Man with His Head Full of Clouds is the metaphorical work that introduces these Landscapes Outside of Time. A man integrated into the landscape, the sky, in this case, a man-landscape symbiosis that offers us an opening to the exterior, metamorphosing the subconscious into a precise and tangible reality, drenched in a special chromatism associated with dreams or hallucinations. Dalí himself was a man who identified himself with the landscape, which he symbiotised and systematically affirmed. He even declared: "I am convinced that I am the Cape Creus and that I embody the living nucleus of that landscape. My existential obsession is to assimilate to Cape Creus, constantly".

His is an arid, mineral landscape with marked horizons, with limpid skies and clouds that seek to resemble those of Andrea Mantegna. A landscape with enigmatic elements, and open to multiple readings. A landscape with references to the history of painting, and to artists such as Johannes Vermeer or Velázquez, and other contemporaries such as Giorgio de Chirico or, on another plane, Yves Tanguy or René Magritte.

Through the 12 paintings in this exhibition, which range from 1926 to 1943, we aim to engage with the "enigmatic elements" and with the landscapes that make his works so singular and have the capacity both to arouse our curiosity and to provoke us as viewers. We shall talk about perspectives and extended shadows, about the concepts visible / invisible, soft / hard, about cypress trees, about fetishist Surrealist objects, about spectres and phantasms, about Freud and psychoanalysis, about perception and knowing how to look. About open readings and multiple significations, which always require for their complete configuration the participation and the gaze of the viewer.

A Surrealism that the painter never completely abandoned, not even at the beginning of the 40's, when he declared that he wished to become a classical artist and was 'capable of continuing the conquest of the irrational by the simple method of becoming a classic and pursuing that research in Divina Proportione interrupted since the Renaissance'. Poetry of America, an oil painting which dates from his exile in the United States, is a good example of this influence. In Poetry of America, Dalí's Surrealism is tinged with classicism and the geology of Cape Creus is confused with that of the great American deserts. And a symbolic tower, a childhood memory, marks the perspective of the composition.

André Breton's claim - It is perhaps with Dalí that for the first time the windows of the mind are opened wide - helps us to immerse ourselves in Dalí's Surrealism, a movement he officially joined in 1929 and to which he contributed new visions and dynamism.

The exhibition is held at the Loggias Room in the Dalí Theatre-Museum, Figueres. The mounting is responsibility of the Conservation and Restauration department with the collaboration of Pep Canaleta from 3carme33. Graphism is by Alex Gifreu. 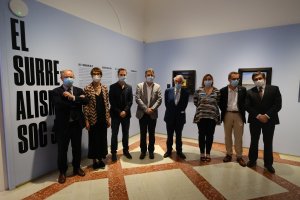 Official reopening of the Dalí Museums