News. The first exhibition on Dalí opens in Korea

The first big exhibition of original works by Salvador Dalí opened today in South Korea. Entitled Salvador Dalí: Imagination and Reality, it shows a hundred artworks including paintings, graphic works and installations at Dongdaemun Digital Plaza (DDP), a building that has become one of the most iconic places in Seoul, designed by the famous Iranian architect Zaha Hadid and the Korean firm Samoo.

The Dalí Foundation collaborates by lending artworks and curating the exhibition's contents with Montse Aguer, director of the Dalí Museums, as chief curator, and Carme Ruiz, vice-curator. The opening event took place today with a representation of the Dalí Foundation: Joan M. Sevillano, Managing Director, Fèlix Roca, Director of Economic Management, and Carme Ruiz, curator. Juan Ignacio Morro Villacián, the Spanish Ambassador in Korea, was also present. The Dalí Museum in Florida was represented by the President of its Board of Trustees, Mrs. Karen Lang Johnston.

The exhibition is organised by the Korean group GNC Media. It opens tomorrow and will be on show until 20th March 2022. It is the first time the Dalí Foundation brings his collection to the Asian country together with works from the Reina Sofía Museum and the Dalí Museum in Saint Petersburg, Florida. 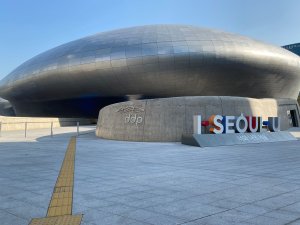