Structured like most of the private foundations on the international scene, the governing organs of the Gala-Salvador Dalí Foundation are organised around a Board currently made up of 21 members and divided into two groups: a group of 12 patrons, privately appointed for life, and another group of 9 patrons appointed by government departments (Spanish central government, the Autonomous Government of Catalonia, and Figueres and Cadaqués town halls). These 21 patrons are at the same time grouped into three working committees focusing on three aspects of management: the Economic Committee, the Artistic Committee and the Public Relations Committee.

The day-by-day work at the Foundation is ruled by a Board of Directors, composed of the Foundation's chairman, Jordi Mercader,  the Director of the Centre for Dalinian Studies, Montse Aguer, The General Director Fèlix Roca Batllori, the Secretary General, Isabella Kleinjung and the Managing Director, Joan Manuel Sevillano. The staff is divided into 3 areas: the Centre for Dalinian Studies (it manages the Archives as well as the Conservation and Restoration department), the General Secretary Area (it includes the Board Secretariat, museums and administration, staff, premises, security, finance and accounts) and finally the Management Area (it rules the Legal Services, the commercial area and marketing, Diffusion and Communication, the Educational Service, Intellectual Property Rights as well as Image Rights of the Material and Immaterial creations by Salvador Dalí). 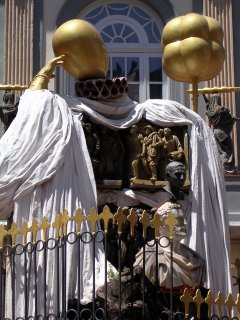