Today a temporary exhibition was opened in the Dalí Theatre-Museum in Figueres, this time entitled What's new? -Velázquez at the Loggias Room in the Dalí museum, rooms that have recently been refurbished.

Since 1988, the Loggias Room has been assigned to exhibiting Salvador Dalí's later work. From the nineteen-sixties onwards, his creative thinking focused mainly on scientific matters and on recovering classical painting. This premise has been observed in the current refurbishment, while the contents of the exhibition have been extended.

The Loggias Room is divided into three areas:

In the first there is an exhibition of works from the nineteen-sixties and -seventies, most notably stereoscopic devices and optical illusions. This includes the following works: The Structure of DNA (c. 1975-76), Pentagonal Sardana (1978-79) and The Harmony of the Spheres (1979). Also on display are large-format works: 50 Abstract Paintings which Seen from Two Metres Change into Three Lenins Disguised as Chinese and Seen from Six Metres Appear as the Head of a Royal Tiger (1962); When It Falls, It Falls (1972-73); Dawn, Noon, Afternoon and Twilight (1979) and In Search of the Fourth Dimension (1979).

These works are a continuation of the preceding room, where other stereoscopies and optical experiments, such as anamorphosis and holography, are exhibited. Together, they not only provide a remarkable representation of Dali's paintings from this period, but also exemplify the artist's interest in all aspects of visual perception and its paradoxes.

The second area is known as the Tower of Enigmas. It has been painted in a lighter colour and access has been improved. From today onwards, it will be home to the Babaouo diorama from 1932, one of the painter's works associated with the script by the same name that he wrote.

The third space temporarily houses Dalí's creative dialogue with Diego Rodríguez de Silva y Velázquez (1599-1660), one of the classics in art history. It reveals Dalí's interest in Velázquez's timeless art. The exhibition, entitled What's new? Velázquez, consists of eleven paintings from between 1960 and 1982. Dalí reinterprets some works by Velázquez, most of which belong to the collection of the Museo Nacional del Prado in Madrid: The Infanta Margarita de Austria (c. 1665, now attributed to Juan Bautista Martínez del Mazo), The Jester Calabacillas (1635-39), Portrait of Sebastián de Morra (1643-49) and Las Meninas or the Family of Philip IV (1656). Dalí also found inspiration in the oil Christ Contemplated by the Christian Soul (1628-29), which belongs to the collection of the National Gallery in London.

Velázquez's influence is underlined with the Bust of Velázquez Turning into Three Figures Conversing (usually on exhibition in the Wind Palace Room). In the place previously occupied by the bust, there is now an unpublished composition by Dalí (c. 1982), made on the covers of a book dedicated to Velázquez (Enrique Lafuente, Velazquez, Phaidon, Oxford University Press, London, New York, 1943).

Note that Velázquez's presence at the Theatre-Museum does not end here. On exhibition in the studio zone of the Wind Palace Room is the hologram Holos! Holos! Velázquez! Gabor! Given that Dalí's interest in holography was driven by a wish to achieve aesthetic realism, it is hardly surprising that Las Meninas and its painter provided the basis for Dalí's first experiment with this technique.

The title of this temporary exhibition is taken from the text written in 1976 and entitled Eureka, in which Salvador Dalí stated: "Since Impressionism, the entire history of modern art has focused on a single objective: reality. This might lead us to ask: What's new? Velázquez".

Dalí's interest in the master of Baroque art was nothing new. It went back a long way. Velázquez, indeed, is one of the "Great Masters of Painting" about whom Dalí wrote in his school's journal Studium in 1919. This fascination persisted: in the house at Portlligat there is a portrait of Velázquez -which appears as part of a gallery of moustached figures- while on one of his studio walls, a gridded reproduction of Las Meninas bore testimony to the painter's daily work.

A passion for Velázquez is also evident in Dali´s treaty 50 Secrets of Magic Craftsmanship (1948), in which Velázquez is only surpassed by Vermeer in a comparative table drawn up by Dalí. It was from the nineteen-fifties onwards, particularly, that Velázquez's presence and influence grew and became evident in Dalí's writings and works.

Dalí would surely have appreciated Velázquez's custom of painting himself in the depicted scene. During the surrealist period, the painter's ambition was to express images of concrete irrationality with great precision, while he asserted that pictorial means of expression should be used to this end. In The Conquest of the Irrational Dalí stated: "As the images of concrete irrationality approach the phenomenally real, the corresponding means of expression approach those of great realist painting -Velázquez and Vermeer de Delft- to paint realistically according to irrational thought and according to the unknown imagination".

Years later, Dalí associated his theory of nuclear mysticism with Velázquez's treatment of form and colour. It is, however, the naturalism of Velázquez that persistently became one of Dalí's points of reference. Velázquez is a constant in his work: he appears each time Dalí is considering to embark on a new stage and take a step forward in his artistic development, both in composition and conceptually.

The refurbishment of the Loggias Room, which houses the temporary exhibition What's new? Velázquez, was performed by Pep Canaleta from 3carme33, who oversaw the design and architectural renovation, while Àlex Gifreu supervised the graphics.

The first task was to change the flooring in order to neutralise its presence. The earthy colour lightens the space and draws visitors' attention to the walls.

A wall was also built during renovation to increase the exhibition space, to limit the main gallery, to draw the public closer to works and to reduce the former sensation of emptiness in the central zone.

A third alteration was to reopen an old passageway with a view to creating a circular route through the spaces and making it unnecessary to retrace one's steps. It is now therefore possible to walk through the different areas of the building, along high passageways with semi-circular arches. The new apertures have been installed according to the existing architectural style.

Each of the new spaces has been enhanced with a different colour: neutral white for places with the greatest flow of public; the colour Galatea, which goes well with the tiled flooring that has been preserved, and the ashen colour. Improvements in lighting have also helped to accomplish this task.

Lastly, the exit onto the courtyard has been redesigned and new flooring has been laid at the start of the exit stairway that leads to the shop. 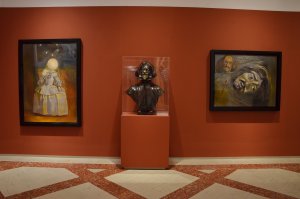