News. A platform is launched with three documentaries on Dalí

A platform is launched today 30th July with the aim of offering global audience the trilogy of documentaries produced by the Gala-Salvador Dalí Foundation, directed by David Pujol, from DocDoc Films, and distributed by Versión Digital. With the title of Salvador Dalí, in search of immortality this is, to this day, the most exhaustive portrait of his life and work in audiovisual format. After being screened at festivals and cinemas in Europe, the United States, Canada, China, Australia and Latin America, these documentaries will finally be available online in 4 languages.

www.salvadordalidocumentary.com is an on-demand video platform, i. e. a website of audiovisual content that can be viewed upon payment. It offers three hours of documentaries about Salvador Dalí in Catalan, Spanish, French and English.

This trilogy is a journey into his career and life starting from childhood in Figueres, his hometown, his studies at the Residencia de Estudiantes in Madrid where he met Federico García Lorca and Luis Buñuel, the stay in Paris where he gets in touch with artists such as Joan Miró, Pablo Picasso or the members of the surrealist group, his discovery of America and his return to his eternal landscape of Portlligat. The meeting with Gala has a preeminent place, his life companion, a woman who identifies his talent, understands his obsessions and mysteries, and who provides him with the right environment to dedicate himself exclusively to creating and to become an internationally renowned artist.

Youth Diaries. 1904-1929. It embraces from Salvador Dalí's birth, in 1904, until 1929, the crucial year in which he joined the surrealist group. Figueres, Barcelona, ​​Madrid and Paris become the geographies of the young Dalí and will be the scenography of the making of a genius.

The secret life of Salvador Dalí. 1929-1982. It starts in 1929, when Dalí met Gala and, with her, they began the construction of the house in Portlligat, the artist's only stable residence and workshop. This documentary shows the painter's strong connection with the landscape of Cadaqués, Portlligat and Cap de Creus, a landscape he drenches in, and which determines him. At the same time, it describes the relationship with his father and his sister and first model, Anna Maria.

The visible woman's refuge 1982-1989. It closes the trilogy by reporting little-known facts about the last period in the life of a Dalí in physical decline and devastated by the loss of his wife Gala, and the imminence of death. Retired in the castle of Púbol that a few years ago he gave to Gala, a weak Dalí considers everything is lost. Only one person, Antoni Pitxot, artist and loyal friend, gives him the key to achieving the long-awaited immortality: starting to paint again. And so, painting will once again become his great obsession.

These three documentaries contain audiovisual and photographic documents from collections such as the Fages de Climent Library, the Alt Empordà Regional Archive, the Figueres Municipal Archive, the Empordà Museum, the Toy Museum and the CRDI. Girona Image Research and Dissemination Center. Among the private collections consulted, many are from Figueres and Cadaqués, as well as from international archives: Centre Pompidou in Paris, Residencia de Estudiantes in Madrid, BBC, INA and Sherman Grinberg Film Library.

Some of these documentaries have received international recognition both in the form of awards and screenings at cultural events: award for best documentary and best film at the Festival Arte Non Stop in Argentina in 2017; Golden Prize in the category of museum feature films awarded by the AVICOM F@IMP (International Committee for Audiovisual and Image Technologies, audiovisual section of the ICOM) in the same year 2017 and prize for the best feature film that awards the Fine Arts Film Festival (FAFF) held in California in 2018. Screenings have been held at the Naples Artecinema Festival, the Fabergé Museum in St. Petersburg (Russia) and the seventeenth edition of The Best in Heritage, an event that is held every year in Dubrovnik, Croatia, with the aim of identifying and disseminating the best museum projects worldwide.

This audiovisual material brings us closer to Salvador Dalí and his entourage with a contemporary approach. It's like a puzzle that must be built piece by piece. It takes us into the particular universe of the artist and the man, of the geographies that make up his cosmogony, of the elements that make him immortal. 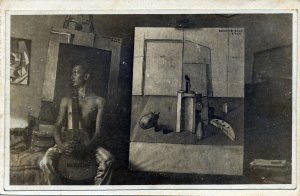 Dalí in his workshop in Figueres