News. Jordi Mercader announces a strategic plan to give a new boost to the Fundació

According to Jordi Mercader, in this new phase the Foundation plans to strengthen the Dalinian Triangle, aggressively defend the prestige of Dalí's work, increase revenues through efficient management and improve service quality, as well as prepare two significant projects for 2020, one in Figueres and the other in China.

The five-year strategic plan is based on maintaining the Foundation's independence through the Board and its economic strength while remaining faithful to the artistic dimension and intellectual importance of Dalí, making the Foundation a centre of excellence and a reference in the world of ideas and culture.

Summing up the year 2017, Mercader highlighted the surplus in revenues of 3.3 million euros, and reported that the three Dalí museums had received 1.4 million visits, an increase of 5.56% over the previous year. He also mentioned the completion of the Catalogue Raisonné of Paintings, which contains a thousand paintings by Salvador Dalí, and the important exhibitions held in Saint Petersburg (Russia), Pisa and London, which received almost half a million visitors.

Regarding the programme for 2018-2019, the chairman emphasised the forthcoming exhibition on Gala at the MNAC, co-organised with this museum, and other displays in Naples, Monaco, Seville and Zaragoza. He also explained that the Foundation's objectives include the preparation of a catalogue raisonné of sculpture and another on Dalí's graphic work.

He also mentioned the purchase of the work Figure in Profile, an oil on cardboard painting of Anna Maria, Dalí's sister. 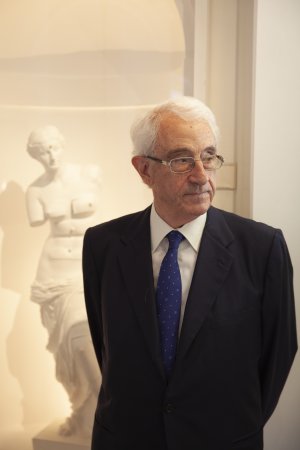 Jordi Mercader in the Dalí Theatre-Museum